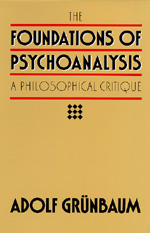 The Foundations of Psychoanalysis A Philosophical Critique

This study is a philosophical critique of the foundations of Sigmund Freud's psychoanalysis. As such, it also takes cognizance of his claim that psychoanalysis has the credentials of a natural science. It shows that the reasoning on which Freud rested the major hypotheses of his edifice was fundamentally flawed, even if the probity of the clinical observations he adduced were not in question. Moreover, far from deserving to be taken at face value, clinical data from the psychoanalytic treatment setting are themselves epistemically quite suspect.

"With this book Adolf Grunbaum has established himself as the most important philosophical critic of the hermeneutic conception not only of psychoanalysis but also of the social sciences, most especially sociology and anthropology. His criticism of the logical and methodological foundations of this style of research and theorizing is masterful and, in my view, definitive."—Melford Spiro "Grünbaum's book is a tour de force. The depth and breadth of his knowledge of psychoanalytic literature in general, and of Freud's works in particular, are most impressive."—Judd Marmor, The Behavioral and Brain Sciences "Adolf Grünbaum, in an indisputable philosophical tour de force, has swept away the Popperian and hermeneutic mythologies about Freudian theory and has substituted a methodological critique of his own that caps the revisionist assessment of Freud."—Frank Sulloway, Free Inquiry "Grünbaum's contribution in ... psychoanalytic epistemology... is unparalleled on . . .[two] counts. Not only does he bring to bear a very great sophistication in the philosophy of science but, in addition, he has done his psychoanalytic homework."—Barbara von Eckardt, Beyond Freud "An absolutely essential critique of psychoanalysis. . . .It goes to the roots of psychoanalysis in a manner which other philosophers. . .have tried to do, but have conspicuously failed to achieve. . . . A brilliant book . . . the most important discussion of the topic to be found in the literature."—HansJ. Eysenck, Behaviour Research & Therapy "His book spells the end of some psychoanalytic pretensions and, at the same time represents a constructive opportunity.... Grünbaum's devastating critique of hermeneutic conceptions and formulations...alone represents a major contribution of his book."—Morris Eagle, Philosophy of Science "Monumental. . .epoch-making."—Frederick Crews, New Republic "No one will be able to write again on the subject without referring to Grünbaum—nor will they want to."—Michael Ruse, Free Inquiry "As a serious psychoanalyst I must say "Thanks! I needed that.". . .it's good to know that we have at least one friendly critic—to paraphrase the familiar saying, we won't then need an enemy."—Morton F. Reiser, The Behavioral and Brain Sciences

Acknowledgments
Introduction: Critique of the Hermeneutic Conception of Psychoanalytic Theory and Therapy
Chapter 1. The Exegetical Legend of "Scientistic Self-Misunderstanding"
Chapter 2. Critique of Habermas's Philosophy of Psychoanalysis
A. Does the Dynamics of Psychoanalytic Therapy Exhibit the "Causality of Fate"?
B. Are Nomological Explanations in the Natural Sciences Generically Non-Historical, While Causal Accounts in Psychoanalysis are Historically-Contextual?
C. Does the Patient Have Privileged Cognitive Access to the Validation or Discreditation of Psychoanalytic Hypotheses?
Chapter 3. Critique of Ricoeur's Philosophy of Psychoanalysis
A. Ricoeur's Truncation of the Purview of Freudian Theory
B. Are Natural Science Modes of Explanation and Validation Gainsaid in Psychoanalysis By the Pathogenicity of Seduction Fantasies, Or By the Explanatory Role of "Meaning"?
C. Does the Theory of Repression Furnish a "Semantics of Desire"?
D. Ricoeur's Disposal of "The Question of Proof in Freud's Theory"
Chapter 4. Are Repressed Motives Reasons But Not Causes of Human Thought and Conduct?
Chapter 5. Critique of GeorgeS. Klein's Version of Hermeneutic Psychoanalysis
Chapter 6. The Collapse of the Scientophobic Reconstruction of Freud's Theory
Part I. The Clinical Method of Psychoanalytic Investigation: Pathfinder or Pitfall?
Chapter 1. Is Freud's Theory Empirically Testable?
A. Clinical versus Experimental Testability:Statement of the Controversy
B. The Purported Untestability of the Psychoanalytic Theory of Personality
Chapter 2. Did Freud Vindicate His Method of Clinical Investigation?
A. Are Clinical Confirmations an Artifact of the Patient's Positive "Transference" Feelings Toward the Analyst?
B. Freud's Reliance on the Hypothesized Dynamics of Therapy as a Vindication of his Theory of Unconscious Motivation
C. Was Freud's Attempted Therapeutic Vindication of the Psychoanalytic Theory of Personality Successful?
Part II. The Cornerstone of the Psychoanalytic Edifice: Is the Freudian Theory of Repression Well Founded?
Chapter 3. Appraisal of Freud's Arguments for the Repression Etiology of the Psychoneuroses
Chapter 4. Examination of the Psychoanalytic Theory of Slips-of Memory, the Tongue, Ear, and Pen
Chapter 5. Repressed Infantile Wishes as Instigators of All Dreams: Critical Scrutiny of the Compromise Model of Manifest Dream Content
Chapter 6. Appraisal of Freud's Further Arguments for the Emergence of Unadulterated Repressions Under "Free" Association
Chapter 7. Remarks on Post-Freudian Defenses of the Fundamental Tenets of Psychoanalysis
Chapter 8. Can the Repression Etiology of Psychoneurosis Be Tested Retrospectively?
Part III. Epilogue
Chapter 9. The Method of Free Association and the Future Appraisal of Psychoanalysis
Chapter 10. Critique of Freud's Final Defense of the Probative Value of Data from the Couch: The Pseudo-Convergence of Clinical Findings
Chapter 11. Coda on Exegetical Myth-Making in Karl Popper's Indictment of the Clinical Validation of Psychoanalysis
Bibliography
Indexes
Name Index
Subject Index