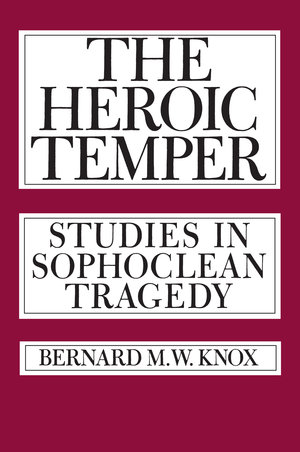 The first two chapters of this book isolate and describe the literary phenomenon of the Sophoclean tragic hero. In all but one of the extant Sophoclean dramas, a heroic figure who is compounded of the same literary elements faced a situation which is essentially the same. The demonstration of this recurrent pattern is made not through character-analysis, but through a close examination of the language employed by both the hero and those with whom he contends. The two chapters attempt to present what might, with a slight exaggeration, be called the "formula" of Sophoclean tragedy.

A great artist may repeat a structural pattern but he never really repeats himself. In the remaining four chapters, a close analysis of three plays, the Antigone, Philoctetes, and Oedipus at Colonus, emphasizes the individuality and variety of the living figures Sophocles created on the same basic armature.

This approach to Sophoclean drama is (as in the author's previous work on the subject) both historical and critical; the universal and therefore contemporary appeal of the plays is to be found not by slighting or dismissing their historical context, but by an attempt to understand it all in its complexity. "The play needs to be seen as what it was, to be understood as what it is."

Bernard M. W. Knox, Director of the Center for Hellenic Studies, Washington, D.C., was formerly Professor of Classics at Yale University. He is the author of numerous articles and monographs including The Serpent and the Flame, and Oedipus at Thebes.