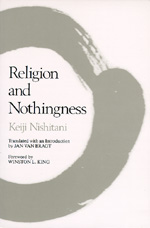 In Religion and Nothingness the leading representative of the Kyoto School of Philosophy lays the foundation of thought for a world in the making, for a world united beyond the differences of East and West. Keiji Nishitani notes the irreversible trend of Western civilization to nihilism, and singles out the conquest of nihilism as the task for contemporary philosophy. Nihility, or relative nothingness, can only be overcome by being radicalized to Emptiness, or absolute nothingness. Taking absolute nothingness as the fundamental notion in rational explanations of the Eastern experience of human life, Professor Nishitani examines the relevance of this notion for contemporary life, and in particular for Western philosophical theories and religious believes. Everywhere his basic intention remains the same: to direct our modern predicament to a resolution through this insight.

The challenge that the thought of Keiji Nishitani presents to the West, as a modern version of an Eastern speculative tradition that is every bit as old and as variegated as our own, is one that brings into unity the principle of reality and the principle of salvation. In the process, one traditional Western idea after another comes under scrutiny: the dichotomy of faith and reason, of being and substance, the personal and transcendent notions of God, the exaggerated role given to the knowing ego, and even the Judeo-Christian view of history itself.

Religion and Nothingness represents the major work of one of Japan's most powerful and committed philosophical minds.

1. What Is Religion?
2. The Personal and the Impersonal in Religion
3. Nihility and Sunyata
4. The Standpoint of Sunyata
5. Sunyata and Time
6. Sunyata and History