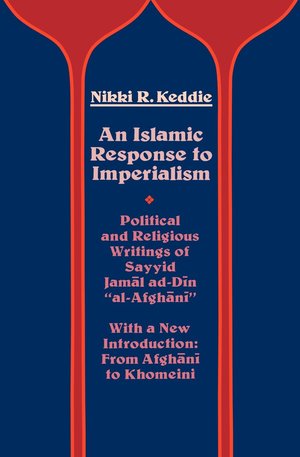 "Keddie has rendered a valuable service ... Afghani merits the attention of Western students of the contemporary international scene and the Muslim renaissance since he made the first significant attempt to answer the modern Western challenge to the Muslim world." ---Eastern World "Sayyid Jamal ad-Din al-Afghani (1838-1897), the well known religious reformer and political activist, led a busy and complex life full of obscure and clandestine ventures. . . . [Keddie] draws on a wide range of primary and secondary sources. In part I an attempt is made to provide an accurate biography and a consistent analysis of Afghani. Part II co ntains translations of some of his most important writings. . . Although Afghani was concerned with the wide ranging need for Islamic reform, he devoted most of his life to the more urgent political problems confronting Muslims--problems arising out of their weakness in dealing with the Western Christian powers. Hence the tide of this book. The picture that emerges here confirms Afghani's long standing reputation as a defender of Muslim interests--not against borrowing European advances in science and technology, but against foreign political, economic, or military encroachment."--Middle East journal "Jamal ad-Din was a mysterious figure and most of the mysteries were of his own making . . . it has been left to Professor Keddie to apply the methods of the critical historian to the matter ... This book shows how successful she has been . . . there has emerged for the first time a credible picture of Jamal ad-Din's life . . . The second part contains translations of works by Jamal ad-Din himself, and these are valuable because most of them were written in Persian and have either not been easily available at all or else have been available only in Arabic translation. This is particularly true of the Refutation of the Materialists. "--International journal of Middle East Studies "For the first time a significant collection of the writings of al-Afghani are now available in English, and so, for the first time, this controversial figure has had more life breathed into him."--American Historical Review

Nikki R. Keddie is a professor of Eastern, Iranian, and women's history. She retired from the University of California, Los Angeles after 35 years of teaching.