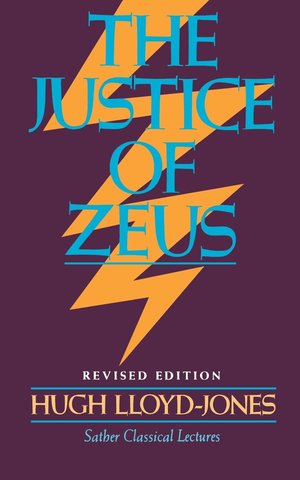 "Lloyd-Jones here considers, in its general character, the outlook of early Greek religion from the Homeric poems to the end of the fifth century, through and analysis of what he takes to be its central constituent, the concept of Dike. The "justice of Zeus" turns out to be two things, the first basic, the second subsidiary: (1) something like natural law or "the divinely appointed order of the universe," an order not always or even usually open to human scrutiny, and (2) moral law, a concession to the insignificant creatures of a day that men are, whereby Zeus "punishes, late or soon, a man who has done injustice to another, either in his own person or in that of his descendants."  Because Lloyd-Jones sees the first and basic notion of Dike as the prerequisite of the later rational speculation to which it led (smoothly and without violent discontinuities, as he claims), his book assumes the dimensions of Kulturgeschichte Griechenlands, and becomes the latest in a small but distinguished list of works with similarly broad scope . . ."

From:
Review
The Justice of Zeus by Hugh Lloyd-Jones
Review by: John Peradotto
The Classical Journal
Vol. 70, No. 3 (Feb. - Mar., 1975) , pp. 61-68
Published by: The Classical Association of the Middle West and South