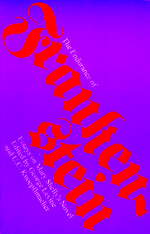 The Endurance of Frankenstein Essays on Mary Shelley's Novel

MARY SHELLEY's Frankenstein; or, The Modern Prometheus grew out of a parlor game and a nightmare vision. The story of the book's origin is a famous one, first told in the introduction Mary Shelley wrote for the 1831 edition of the novel. The two Shelleys, Byron, Mary's stepsister Claire Clairmont, and John William Polidori (Byron's physician) spent a "wet, ungenial summer in the Swiss Alps." Byron suggested that "each write a ghost story." If one is to trust Mary Shelley's account (and James Rieger has shown the untrustworthiness of its chronology and particulars), only she and "poor Polidori" took the contest seriously. The two "illustrious poets," according to her, "annoyed by the platitude of prose, speedily relinquished their uncongenial task." Polidori, too, is made to seem careless, unable to handle his story of a "skull-headed lady." Though Mary Shelley is just as deprecating when she speaks of her own "tiresome unlucky ghost story," she also suggests that its sources went deeper. Her truant muse became active as soon as she fastened on the "idea" of "making only a transcript of the grim terrors of my waking dream": "'I have found it! What terrified me will terrify others."' The twelve essays in this collection attest to the endurance of Mary Shelley's "waking dream." Appropriately, though less romantically, this book also grew out of a playful conversation at a party. When several of the contributors to this book discovered that they were all closet aficionados of Mary Shelley's novel, they decided that a book might be written in which each contributor-contestant might try to account for the persistent hold that Frankenstein continues to exercise on the popular imagination. Within a few months, two films--Warhol's Frankenstein and Mel Brooks's Young Frankenstein--and the Hall-Landau and Isherwood-Bachardy television versions of the novel appeared to remind us of our blunted purpose. These manifestations were an auspicious sign and resulted in the book Endurance of Frankenstein.

"A highly speculative and entertaining set of essays."--English Studies "Many of the energies, interests, and elements that wen into the making of [Mary Shelly's] first and most formidable novel are documented in this extraordinary volume."--Nineteenth Century Fiction "Daring in the right sense . . . their rich anthology never sinks to the level of pedantic shelf-stuffing."--Booklist