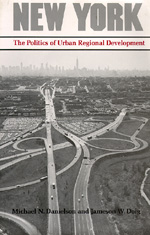 This volume is the fourth in the Franklin K. Lane series on the governance of major metropolitan regions. The series is sponsored by the Institute of Governmental Studies and the Institute of International Studies, University of California in Berkeley. Readers of these volumes and other relevant literature will no doubt agree with the authors of this book that similar patterns are found in New York, London, Toronto, Stockholm, and indeed in "every other major metropolitan region in the United States and in other advanced industrial societies." The presence of such common factors and trends, although they assume different configurations in various metropolitan regions, has been demonstrated by the work of many scholars, including Peter Hall, Brian Berry, Marion Clawson, Jean Gottmann, Larry Bourne and William Robson, as well as by the authors of the other Franklin K. Lane books—Donald Foley, Albert Rose and Thomas Anton.  In the present volume Michael Danielson and Jameson Doig have described and analyzed the cultural, economic, political and other social forces shaping development in the New York region. They present a picture of a region singular in its attractions, problems, geographic scope, magnitude of development, and complexity of the network of organizations involved in its governance.

Jameson W. Doig is the Professor of Politics and Public Affairs, Emeritus at Princeton University.

"An important book both for people whoe work for government as well as for those who study the governmental process. . . . The scope and depth of investigation and analysis are impressive. . . .I appreciate and respect the authors' insights into the intricate and sometimes subtle--other times not so subtle--role of government in urban development."--Herbert Sturz, Chairman, Department of City Planning, City of New York "A major work. . . will be required reading for all those interested in the cultural, economic, social or political forces of the New York metropolitan region. . . a worthy successor, as well as in part a corrective, to the path-breaking work done by Robert Wood and Raymond Vernon two decades ago. It deserves, and I'm sure will attract, wide notice."--Demetrios Caraley, Professor of Political Science, Columbia University