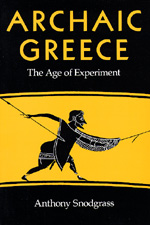 Archaic Greece The Age of Experiment

Until quite recently, it has been the accepted view that the Archaic period of Greek history was by definition merely a prelude to the Oassical period, an era regarded as unsurpassed in its literary, intellectual, artistic, and political achievements. Lately, however, ancient historians and Classical archaeologists have undertaken a major reappraisal of their subject, one result of which has been a broadening view of the Archaic period and its importance to the history of Greece. In this first major book on Archaic Greece to be written by an archaeologist, Professor Snodgrass shows how the supremacy of Classical Greece would have been impossible without the preceding centuries of the Archaic period. The intellectual revolution which divided the Archaic period from the Oassical transformed something remarkable into something unique. But there was an earlier revolution, a "structural revolution," which took place not merely within the Archaic period, but at its beginning. It had far-reaching effects: it established the economic basis of Greek society, as well as the main outlines of its social framework; it drew the political map of the Greek world in a form that was to endure for four centuries; it set up, with even greater permanence, the forms of state that were to determine Greek political history; it provided the interests and goals, not merely for Greek but for Western art as a whole, which were to be pursued over the next two and a half millennia; it gave Greece in the Homeric epics an ideal of behavior and a memento of past glory to sustain it; it provided much of the basis of Greek religion; and it furnished many lesser things, among them the means for Greek society to defend its independence militarily. It is doubtful whether, before or since, all these features have ever come about in one conn try with such concertedness and such speed. Archaic Greece gives a broader cultural history of the period than has hitherto been attempted, and Professor Snodgrass shows that it can be seen, for perhaps the first time, as a complete episode in its own right. His fresh and personal approach to his subject, together with the book's superb illustrations, will ensure a wide audience.

Anthony M. Snodgrass is Emeritus Laurence Professor of Classical Archaeology at the University of Cambridge.