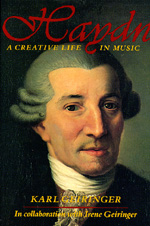 Haydn A Creative Life in Music, Revised and Expanded

This definitive study of the life and works of Joseph Haydn represents half a century of research. As a curator of the Gesellschaft der Musikfreunde in Vienna, Dr. Geiringer was in charge of one of the world's leading Hayden collections. His scholarly investigations took him to various monasteries, to libraries in Eisenstadt, Prague, Berlin, Paris, London, and Washington, D.C., and, as a guest of the Hungarian government, to the previously almost inaccessible archives of the Princes of Esterhazy in Budapest. In the past decade, Haydn studies have progressed enormously. A thematic catalog is now available, and a substantial part of Haydn's vast creative output is accessible in critically revised editions. The new edition of Hayden: A Creatie Life in Music has been substantially rewritten to incorporate the results of recent research and to remove the tarnish that had assimilated on the picture of Haydn in the earlier years.

Karl Geiringer (1899 - 1989) was Professor Emeritus of Music at the University of California, Santa Barbara. He is the author of many books, including Brahms: His Life and Work, Johann Sebastian Bach: The Culmination of an Era, and The Bach Family: Seven Generations of Creative Genius. Irene Geiringer (1899 - 1983) received her Ph.D. from the University of Vienna, where she studied philosophy and German literature. Mrs. Geiringer assisted her husband in his research and collaborated on all of his books, concentrating in particular on the biographical sections.