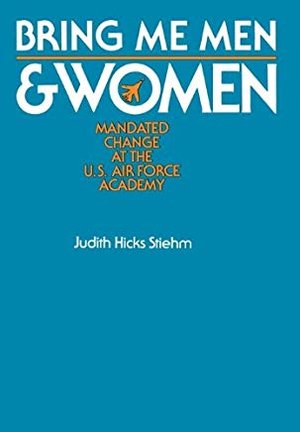 Bring Me Men and Women Mandated Change at the U.S. Air Force Academy

Women's integration into the military academies afforded an almost unique opportunity to study social change. It was a tidy, well-defined natural experiment. The Air Force Academy was willing to permit the kind of external scrutiny that afforded an objective account of the facts of the first year of integration. For sixteen months the academy allowed the author to interview freely and repeatedly all persons concerned with planning and implementing women's admission. Working as a historian (with individuals and documents rather than with questionnaires), Stiehm tells the report of this first year as fully and as accurately as possible.

Judith Hicks Stiehm is Professor of Political Science at Florida International University where she served as Provost and Academic Vice President for four years. Her specialties include political theory, social change, the status of women, and civil-military relations. She has taught at San Francisco State, the University of Wisconsin, UCLA, and the University of Southern California where she served as Vice Provost. She has been a Visiting Professor at the U.S. Army Peacekeeping Institute and at the Strategic Studies Institute at Carlisle Barracks. In 2010-11 she served as Distinguished Visiting Professor at the U.S. Air Force Academy. She earned a BA in East Asian Studies at the University of Wisconsin, an MA at Temple University in American History, and a PhD in Political Theory from Columbia University.

Her books include Nonviolent Power: Active and Passive Resistance (Heath, 1972), Bring Me Men and Women: Mandated Change at the U.S. Air Force Academy (California, 1981), Arms and the Enlisted Woman (Temple, 1989), It's Our Military Too!: Women and the US Military (Temple, 1996), U.S. Army War College: Military Education in a Democracy (Temple, 2002), and Champions for Peace: Women Winners of the Nobel Prize for Peace (Boulder: Rowman and Littlfield, 2006).

Professor Stiehm has served on the Defense Advisory Committee on Women in the Military, the California Postsecondary Education Commission, the California Vocational Education Commission, as a consultant to the United Nations Commission for the Advancement of Women and to the Lessons Learned Unit of the United Nations' Department of Peacekeeping Operations. She has appeared as an Expert Witness before the Senate Armed Services Committee and is a member of the Council on Foreign Relations. She has been awarded the U.S. Army Distinguished Civilian Service Medal, the University of Wisconsin Distinguished Alumni Award (2006), and the American Political Science Association's Frank Goodnow Award (2008). She appears in Who's Who.

7. Leaders and Surrogates: The Commandant's Shop

8. Immune Intellects: The Dean and His Faculty