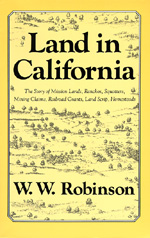 The story of California can be told in terms of its land. Better still, it can be told in terms of men and women claiming the land. These men and women form a procession that begins in prehistory and comes down to the present moment. Heading the procession are Indians, stemming out of a mysterious past, speaking a babel of tongues, and laying claims to certain hunting, fishing, and acorn-gathering areas-possessory claims doomed to fade quickly before conquering white races. Following the Indians are Spanish speaking soldiers, settlers, and missionaries who, in 1769, began coming up through Lower California and taking over the fertile coast valleys and the harbors of California. Their laws were the Laws of the Indies controlling Spanish colonization and governing ownership of land. Missions, presidios, pueblos, and ranchos were born in the period of these people.

"A writer of great warmth and skill . . . Robinson has taken the complicated business of land titles and, without generalizing or avoiding statistics, he has done the unbelievable—made a story any reader will be unable to put down. Here are the original owners, who had no land titles except those from the Great Spirit; the mission priests and their overseeing of Indian lands; the presidios and pueblos; the great Spanish and Mexican land grants and how they were torn away from the dons piecemeal by loan sharks, squatters. Here came thieves and adventurers (with a few notable exceptions, such as Don Abel Stearns, the Yankee was a highwayman) swarming the pastoral lands; mining claims and railroad grants; homesteads; tidelands; and, in quite recent years, the renewed effort at showing the land grants to be worthless. . . . Here, too, are personal stories of men and women engaged in that vast struggle, often bloody and violent."—Los Angeles Times

"A scholarly and thorough treatment . . . Land in California merits serious consideration. W.W. Robinson [was] vice president of Title Insurance and Trust Co., Los Angeles, and his professional interest in land and its ownership has led to a comprehensive study of California properties from the Spanish grants to the sharply-criticized decision of the United States Supreme Court on the 'marginal lands' along the coast. Students of California history will find much of absorbing interest in Mr. Robinson's book. . . . A valuable contribution to Californiana and will be read carefully by everyone who is interested in the state and its development."—New York Times