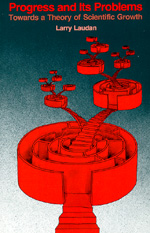 Progress and Its Problems Towards a Theory of Scientific Growth

"A book that shakes philosophy of science to its roots. Laudan both destroys and creates. With detailed, scathing criticisms, he attacks the 'pregnant confusions' in extant philosophies of science. The progress they espouse derives from strictly empirical criteria, he complains, and this clashes with historical evidence. Accordingly, Laudan constructs a remedy from historical examples that involves nothing less than the redefinition of scientific rationality and progress . . . Surprisingly, after this reshuffling, science still looks like a noble-and progressive-enterprise ... The glory of Laudan's system is that it preserves scientific rationality and progress in the presence of social influence. We can admit extra-scientific influences without lapsing into complete relativism. . . a must for both observers and practitioners of science." --Physics Today "A critique and substantial revision of the historic theories of scientific rationality and progress (Popper, Kuhn, Lakatos, Feyerabend, etc.). Laudan focuses on contextual problem solving effectiveness (carefully defined) as a criterion for progress, and expands the notion of 'paradigm' to a 'research tradition,' thus providing a meta-empirical basis for the commensurability of competing theories. From this perspective, Laudan suggests revised programs for history and philosophy of science, the history of ideas, and the sociology of science. A superb work, closely argued, clearly written, and extensively annotated, this book will become a widely required text in intermediate courses."--Choice

Larry Laudan is a contemporary philosopher of science and epistemologist. He has strongly criticized the traditions of positivism, realism, and relativism, and he has defended a view of science as a privileged and progressive institution against popular challenges.