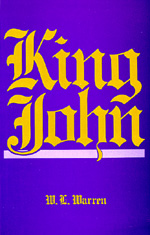 King John is a study not only of a king and his political misfortunes, but also of a period—a period of profound changes in society at large, and hence one of unprecedented stressed. John's personality, so distorted by chronicles such as Roger of Wendover and Matthew Paris, is investigated through his acts: but he is seen also against the background of his predecessors on the throne, of the society in which he lived and of the problems that were posed for a rule by that society.

John was the fourth son of Henry II and Eleanor of Aquitaine to survive to manhood. In his younger days he was irresponsible, selfish and disloyal, but from 1194 he began to emerge as much more like his father than any of the brothers whose prowess he had formerly sought to rival. Only Henry II himself is comparable to the later John in his powers of organization and the ability, invaluable in a ruler, to bend his energies to points of administrative detail.

The account of John's reign is fascinating, revealing and extremely readable. Dr. Warren's analysis of the contemporary situation explains the true significance of the struggle for the Magna Carta. he is unsparing in his criticism of John's failing but gives due recognition to his remarkable activities.

1. The Genesis of a Sinister Reputation
2. Gaining a Kingdom
3. Losing a Duchy
4. King of England
5. King Versus Pope
6. King John and his Barons
7. The Road to Runnymedee
8. The Road to Newark 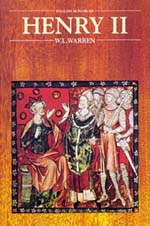