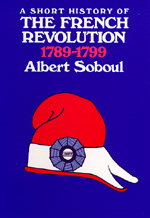 Albert Soboul has held the Chair of the History of the French Revolution at the Sorbone since 1967, and is probably the leading Marxist scholar working in that field today. The book translated here should be regarded more as a synopsis of Professor Soboul's interpretation of the Revolution than as a detailed account of the course of events; it is an essay in analysis rather than a narrative. In it the author argues that the French Revolution can only be understood in terms of class struggle, and that any attempt to diminish the significance of class conflict as its motive force obscures the meaning of the events of the Revolution and rends them ultimately incomprehensible.

The course of the Revolution and its final outcome, which was clear by the time Napoleon seized power in 1799, were the products of a complex class struggle enacted simultaneously on many levels, leading finally to the triumph of the bourgeoisie, the defeat of the aristocracy, and the fragmentation and collapse of the popular forces, who as the allies of the bourgeoisie had played a vital part in securing its victory.

Professor Soboul shows that although the Revolution was caused initially by specific factors peculiar to the structure of French society at the end of the Old Regime, it came to constitute the definitive type of the bourgeois revolution and opened the way for the ascendary of industrial capitalism in the next century, not merely in France, but in the rest of Europe and the world at large.

Conclusion: The French Revolution and the History of the Contemporary World
Selected Bibliography