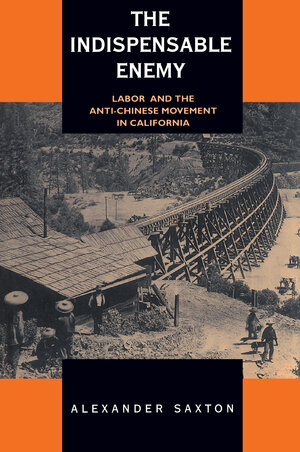 The Indispensable Enemy Labor and the Anti-Chinese Movement in California

With a foreword by William Deverell

The Indispensable Enemy examines the anti-Chinese confrontation on the Pacific Coast as it was experienced and rationalized by the white majority. Focusing on the Democratic party and the labor movement of California through the forty-year period after the Civil War, Alexander Saxton explores aspects of the Jacksonian background which proves crucial to an understanding of what occurred in California. The Indispensable Enemy looks beyond the turn of the 19th century to trace results of the sequence of events in the West for the labor movement as a whole, influencing events that led to the crystallization of an American concept of national identity.

Alexander Saxton (1919-2012) was the author of The Rise and Fall of the White Republic (1991), and the novels Bright Web in the Darkness (California reissue 1997) and Great Midland. He was Professor Emeritus of History at the University of California, Los Angeles.

"The Indispensable Enemy will provide an essential source for information and insight into this subject. Like others of this genre, it is a serious work that deals intensively with the themes suggested in the title. It provides not only the broad overview, but a stimulating study of the subtleties, complexities, and revealing nuances of the inter-relationships between the anti-Chinese movement and California's organized labor movement."—American Historical Review

"Alexander Saxton's work deserves widespread attention for its valuable contribution to our understanding of Chinese immigration as a crucial issue in the development of organized labor in California during the last third of the nineteenth century. With a fine hand the author traces the role of the "yellow specter" in the training of labor leaders, in the in-fighting and factional disputes during those decades, and in the development of the sectional nature of organized labor on the West Coast as "a regional labor center.""—Pacific Historical Review

"This study brings out in detail the complex of sentiments, ideas, programs, organizations, and personalities covering several decades. There are interesting analyses of key figures such as Henry George, Denis Kearney, Frank Roney, Burnette Haskell, Sigismund Danielewicz, and others. The California story is placed within the context of the larger national situation of labor and ethnic relations and their interactions, thus adding to its interest and value."—Annals of the American Academy of Political and Social Science

"Saxton's bold inquiry into the anti-Chinese ideology and politics of white workers in California demonstrates the power of race to distort political consciousness and subvert labor solidarity. His splendid analysis puzzles out the sources and implications of anti-Chinese hostility during the 19th century, and challenges labor scholars and activists to examine the impact of the trade union movement nationally."—Gwendolyn Mink, author of Old Labor and New Immigrants in American Political Development

"An eloquent and meticulous history of race and class which is as exciting today as when it first appeared."—David Roediger, Professor of History, University of Minnesota

"Saxton's path-breaking study continues to underscore the significant of race in the American politics and culture--a timely critical perspective for the 21st century."—Ronald Takaki, author of A Different Mirror
"No one interested in the intersection of race, class, and ideology can neglect this book. It deserves a wide audience among a new generation of college students."—Robert W. Rydell, Professor of History, Montana State University

"A classic—one that helped launch the "new western history" and belongs on a short list of books that have transformed our understanding of the western experience."—Gary B. Nash, Director of the National Center for History in the Schools