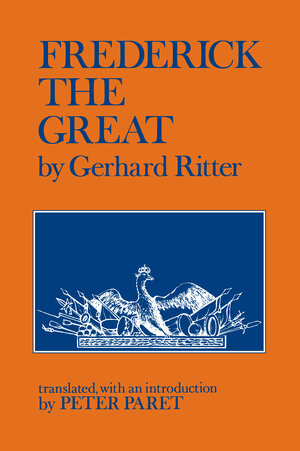 Frederick the Great A Historical Profile

GERHARD RITTER'S biography of Frederick the Great onglnated in a series of lectures, which were published with scarcely any revisions in 1936. In this translation, based on the third edition, published in 1954, Paret has tried to convey the hard and precise style that characterizes the German text, while eliminating some of the numerous adjectives and parallel phrases that a lecturer might have found useful for emphasis but which seem unnecessary on the printed page. With the author's agreement also excluded is the brief introduction and epilogue of the original, since they are addressed specifically to the German reader and to German conditions. Gerhard Ritter died in 1967, shortly after the translation was completed.

Gerhard Georg Bernhard Ritter (April 6, 1888  – July 1, 1967) was a nationalist-conservative German historian, who served as a professor of history at the University of Freiburg from 1925 to 1956. Peter Paret is American military, cultural and art historian with a particular interest in German history.

"Occasionally in historical literature the profession is treated to a work which transcends the bounds of raw, everyday history to assume the dimension of a great piece of art. This volume by the late Ritter is such a work . . . "--Choice "This book is not a detailed account of a man and his times in the usual sense, but a critical examination of Frederick the Great, the institutions of absolutism, the difference between Germany's past and that of its western neighbors. Dr. Ritter chronicles Frederick's life, his foreign and domestic policies, his military doctrines, and his beliefs and ideals."--Military Affairs "Ritter's book is complex, subtle, and scholarly, and deserves to be read two or three times. . . .There is no aspect of Frederick's government or wars that Ritter does not analyze with subtlety and usually with conviction."--New York Review

1. Frederick and His Age: The System of Absolutism
2. The Brandenburg-Prussian Heritage
3. The Development of Frederick's Personality
4. The King's View of the World
5. The King's View of the State
6. The Conquest of Silesia
7. Maintenance of Prussia's New Power
8. Frederician Warfare
9. The Character of Frederician Government and Society
10. The Old King: Foreign Policy in the Last Decades of His Reign