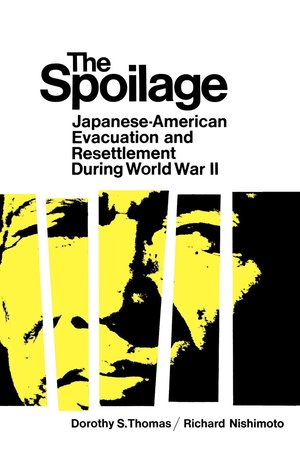 The Spoilage Japanese-American Evacuation and Resettlement During World War II

During World War II, 110,000 citizens and resident aliens of Japanese ancestry were banished from their homes and confined behind barbed wire for two and a half years. No more blatant violation of civil rights has ever been decreed by an American president, yet so strong were the currents of bigotry and war time hysteria that effective political opposition was impossible. However, a group of University of California social scientists, sensing the enormity of the outrage, organized in 1942 to record and analyze the causes, legal and social consequences, and long-term effects of the detention program. The Spoilage, one of a series of books which resulted, analyzes the experiences of that part of the detained group-some 18,000 in total-whose response was to renounce America as a homeland; it shows the steps by which these "disloyal" citizens were inexorably pushed toward the disaster of denationalization. Essentially the result of years of research by participant observers of Japanese ancestry, it is a factual record of enduring value to the student of America's troubled ethnic relations.

Dorothy Swaine Thomas (1899 – 1977) was an American sociologist and economist. She was the 42nd President of the American Sociological Association and the first woman in that role. Richard Shigeaki Nishimoto (1904 - 1956) is probably the most cited Issei author who wrote on the camps in English—-specifically on the WRA camp known as Tule Lake. Educated in both Japan and the USA, Nishimoto distinguished himself as the only Issei to be employed full-time as a researcher for the Japanese American Evacuation and Resettlement Study (JERS).