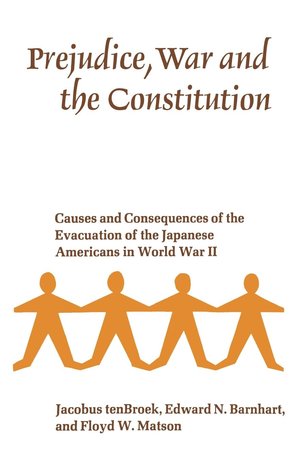 Prejudice, War, and the Constitution Causes and Consequences of the Evacuation of the Japanese Americans in World War II

During World War II, 110,000 citizens and resident aliens of Japanese ancestry were banished from their homes and confined behind barbed wire for two and a half years. This comprehensive work surveys the historical origins, political characteristics, and legal consequences of that calamitous episode. The authors describe the myths and suspicions about Orientals on the West Coast and trace the influence of racial bigotry in the evacuation and in the court cases growing out of it. A theory is advanced to account for the administrative and legal decisions which initiated and concluded this calamity. Finally, the authors analyze the principal constitutional issues involved in the evacuation and their implications for the future.

"Makes very sad reading; but it should be read as a lesson in national humility."--California Law Review "As an objective record and analysis of the Japanese evacuation [it is] a significant contribution to our national life."--American Sociological Review "It is likely to stand as the definitive work in its area."--The Annals