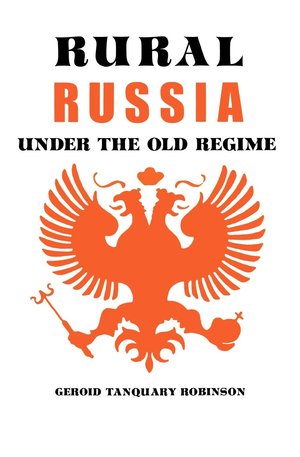 Geroid Tanquary Robinson (founder and first director of the Russian Institute at Columbia University; Chief of the U.S.S.R. Division, Research and Analysis Branch, U. S. Office of Strategic Services, 1941·45; holder of the Medal of Freedom) has produced a book that is, by general consensus, supreme in its field. The work makes a major contribution to the understanding of the struggle of the peasantry with the old landlords and the Imperial Government, and consequently offers an iltuminaling approach to the struggle between the Communist Government and the most stubborn and massive domestic force this Government has faced-the peasant opposition.

Geroid T. Robinson (1893-1971) was the Seth Low Professor of History at Columbia University.

"An example of that rare phenomenon, namely, a scientific study of a phase of Russian social life written without the least intrusion of political prejudice or bias . . . Mr. Robinson manages, by the vigour of his scientific in tegrity, to make interesting what might be a very dull subject."--Times Literary Supplement (London)  "His strict adherence to evidence, the richness of his documentation, the soundness of his judgment, the clarity of his thinking. raise his work to the level of the finest historical writing."--Avrahm Yarmolinsky, New Republic " ... helps recapture for American scholarship the lustre that originally attended the work of Motley, Prescott, and Ticknor."--Lewis Mumford, Atlantic Monthly " . . . offers the most careful and masterful analysis of the most fundamental aspects of Russia 's {prerevolutionary] history available in any language."--Jesse D. Clarkson, in A History of Russia (1962) "Distinguished scholarly history . . . an invaluable background for an understanding of the Revolution of 1917."--Paul L. Horecsky, ed., Russia and the Soviet Union: A Bibliographical Guide. . . . {1965)