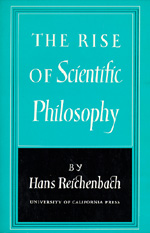 The Rise of Scientific Philosophy

This book represents a new approach to philosophy. It treats philosophy as not a collection of systems, but as a study of problems. It recognizes in traditional philosophical systems the historical function of having asked questions rather than having given solutions. Professor Reichenbach traces the failures of the systems to psychological causes.

Speculative philosophers offered answers at a time when science had not yet provided the means to give true answers. Their search for certainty and for moral directives led them to accept pseudo-solutions. Plato, Descartes, Spinoza, Kant, and many others are cited to illustrate the rationalist fallacy: reason, unaided by observation, was regarded as a source of knowledge, revealing the physical world and "moral truth." The empiricists could not disprove this thesis, for they could not give a valid account of mathematical knowledge.

Mathematical discoveries in the early nineteenth century cleared the way for modern scientific philosophy. Its advance was furthered by discoveries in modern physics, chemistry, biology, and psychology. These findings have made possible a new conception of the universe and of the atom. The work of scientists thus altered philosophy completely and brought into being a philosopher with a new attitude and training.

Instead of dictating so-called laws of reason to the scientist, this modern philosopher proceeds by analyzing scientific methods and results. He finds answers to the age-old questions of space, time, causality, and life; of the human observer and the external world. He tells us how to find our way through this world without resorting to unjustifiable beliefs or assuming a supernatural origin for moral standards. Philosophy thus is no longer a battleground of contradictory opinions, but a science discovering truth step by step.

Professor Reichenbach, known for his many contributions to logic and the philosophy of science, addresses this book to a wider audience. He writes for those who do not have the leisure or preparation to read in the fields of mathematics, symbolic logic, or physics. Besides showing the principal foundations of the new philosophy, he has been careful to provide the necessary factual background. He has written a philosophical study, not a mere popularization. It contains within its chapters all the necessary scientific material in an understandable form—and, therefore, conveys all the information indispensable to a modern world-view.

The late Hans Reichenbach was Professor of Philosophy at the University of California, Los Angeles. His previous books include