That’s not the case; and I say so not from prudery, or from any desire to fabricate a sanitized and “respectable” image of the man, but out of respect for the evidence. For good or ill, the Autobiography does not contain a reference to sex toys or vibrators of any kind.

Now, there is, in addition, the “Ashcroft-Lyon Manuscript,” written by Clemens in 1909. It is not part of the Autobiography, but we are planning to include it as an appendix to Volume 3. It’s an important document, never before published in full, and it does indeed concern Clemens’s intense dissatisfaction with Lyon and her companion Ralph Ashcroft.

Vibrators were marketed (to men and women) in the early twentieth century, very much above-board. They were sold as remedies for rheumatism, headaches, neuralgia, and other ailments. Clearly, mentioning them was not considered disreputable, even in that very proper time: they were advertised in newspapers and sold in stores. The 1913 ad reproduced below, from the (for most of us) un-erotic pages of Popular Mechanics, may help to contextualize these machines. 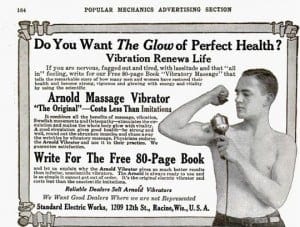 We got an electrical vibrating machine for the King [i.e. Clemens], in N.Y., and tested it on me and on him [i.e. Ashcroft].

But is it, as claimed, a gift from Lyon to Clemens? “For the King” might represent a commission from him, to be carried out while Lyon was in the city.

cures and limbers lame and stiff backs … it stirs up the circulation quite competently and tones up the nerves—and that is really the essential function of osteopathy and kindred treatments.

It goes without saying that Mark Twain had a sex life and the Mark Twain Project’s more than thirty volumes of Mark Twain’s public and private writings and its stewardship of the largest archive of Mark Twain’s writings at The Bancroft Library, have done more than any other source to provide access to information about it. There are revelations in the Autobiography of Mark Twain, but it is too bad that readers anticipating this landmark publication have been misled into expecting one that isn’t there.

Korea on the 38th Parallel
Mark Twain on PBS NewsHour

Mark Twain and Isabel Lyon: Scandal, but No Sex Toy