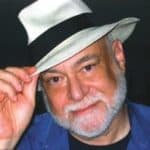 If you think you see Charles Darwin roaming the streets this month, it might be Richard Milner, the singing Darwin scholar. Since his graduate school days, Milner, a science historian and author of Darwin’s Universe, has been transforming key moments in scientific history into funny, enlightening songs, and performing them in character. His one-man musical, Charles Darwin Live and In Concert, is on a worldwide tour to celebrate Darwin’s 200th birthday and the 150th anniversary of On the Origin of Species.

Based on letters written by Darwin and other 19th century scientists, Milner’s lyrics weave humor and imagination with factual history. He dramatizes the moment Darwin’s friend Thomas Henry Huxley first read On the Origin of Species:

“‘Twas adaptive radiation that produced the mighty whale
His hands
have grown to flippers and he has a fishy tail
Selection’s made him
streamlined for his liquid habitat
Why didn’t I think of that?”
—from “Why Didn’t I Think of That?” lyrics ©1992 by Richard Milner

In the Gilbert and Sullivan-style “Darwin’s Nightmare”, (co-written
with John Woram), Darwin tosses and turns all night, worrying about the
fallout from his publishing his discoveries:

“I was lying awake with a
dismal headache
And my sleep was put off by anxiety
For I feared
that my plan of explaining how man
Had evolved would provoke
notoriety.”
—from “Darwin’s Nightmare”, lyrics ©2007 by Richard Milner and John Woram

Milner creates wit and hilarity from the great discoveries of science, but
his songs do more than entertain—they pay tribute to Darwin and to the
spirit of human curiosity.

Watch Milner’s New York Times music videos: “Why Didn’t I Think of That?” and “Darwin’s Nightmare“, and listen to an interview with Milner on Voice of America.

Darwin: Live and in Concert‘s next appearance is November 10 at the Linnean Society of London, followed by the Contra Costa Jewish Community Center in Walnut Creek, CA on November 14. Find the full schedule, plus more songs and information, at Milner’s website.

Darwin and the Story of Life