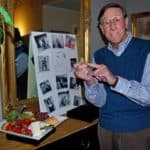 This week, the San Francisco Chronicle ran a feature of Gerald Nachman’s Right Here on Our Stage Tonight!: Ed Sullivan’s America. The Chronicle’s Regan McMahon interviewed Nachman in Oakland, where Nachman grew up, and weaves together the author’s own story with that of Ed Sullivan’s groundbreaking show. “Nachman astutely examines the show as a cultural watermark, something that united the country as nothing has before or since…”, McMahon says.

As a television critic for the San Jose Mercury News, Nachman’s first review was of the Ed Sullivan Show. “I packed the review with wisecracks,” he recalls in the book. Nachman (above, at a book launch party hosted by friends) characterizes primordial TV as a grey and dismal entity, shrouded in the shadow of radio and Hollywood, and the Ed Sullivan show as a kind of revolution, a catalyst not only for TV’s initial success, but for popular culture across America: “Sullivan’s show was something beyond even what it first envisioned for itself: it became the great equalizer, relentlessly democratic, cutting across all age, class, cultural, and ethnic boundaries…” he says in the book.

It was the place for aging stars and new talent, and and harnessed the social changes that were transforming the country, entertainment, and celebrity. And it brought people together—as Sullivan and McMahon both point out, the Ed Sullivan Show drew 47 million viewers on a weekly basis in 1955, compared to 35 million who watched the American Idol finale in 2008.

Listen to the UC Press podcast with Gerald Nachman: [podcast]https://www.ucpress.edu/content/podcasts/11270.mp3[/podcast]

The Junk Food of Journalism