Since our last update, David and Janet Carle have followed the 38th parallel from Greece to Turkey. On the island of Samos they visited the Samos Ecological Society, watched for endangered monk seals and walked through a 1,000-foot water tunnel that was hand-chiseled through a mountain more than 2,500 years ago. They wandered among the ruins of the Temple of Artemis in Ephesus, explored travertine terraces and springwater pools in Pamukkale, and visited the great salt lake Tuz Golu. In Cappadocia, “fairy chimneys” showed the magical architecture of volcanic formations, and fallen stone heads at Mt. Nemrut hinted at a formidable past. 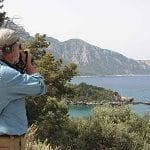 We visited Greece for the first time during the Olympic Games in 2004. Though we were disappointed to not get to Athens on this trip, due to the airline strike, back then we had visited sites along the parallel at Delphi, Olympus, the canal at Corinth, and of course, in Athens….Read More

Ephesus, the grand archeological jewel of Western Turkey (37°56’N, 27°20’E) nestles in a canyon in a pine forest. During its heyday in 100-200 AD, 200,000 people lived in this Roman capital of Asia Minor. Notables from history such as Cleopatra, Alexander the Great, Saint Paul, and the Virgin Mary all are tied to the history of this great city on the hill…. Read More

The Travertine Terraces of Pamukkale

Talking about tufa (calcium carbonate) is a constant at Mono Lake. It was a pleasure to learn that western Turkey has a spectacular feature made out of calcium carbonate—the travertine terraces of Pamukkale. Overlooking the Lycos Valley and the Buyuk Menderes River (which twists so much it gave us the word “meander”), brilliant white terraces and aquamarine…Read More

Turkey’s second largest lake, the salty Tuz Golu, proved surprisingly hard to find (its south end is at 38 30′, and it extends north for 30 miles). A huge white expanse hovered in the distance, but was it water or a salt flat? In May, there is water in Tuz Golu, one of the saltiest lakes in the world at 33% salinity, but it was fast evaporating with the warm temperatures….Read More 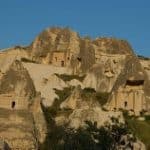 Volcanic ash, hardened into rock and capped by basalt from later eruptions, then eroded by water through the ages, has created a fantasy landscape in the Cappadocia region of central Turkey. Fairy chimneys, towers, and mushroom shapes became houses and fresco painted chapels as local people carved caves into the whitish tuff—but around here everyone uses the name “tufa.” In our many years of telling visitors about Mono Lake’s tufa towers…Read More

Mt. Nemrut: Where the Gods Lay Their Heads

Today we stood ankle-deep in Euphrates River water, north of Malatya in southeastern Anatolia. Only a few miles further east, archaeologists are presently uncovering a 7,000-year old city called Arslantepe. Along this river (and the Tigris, which we will visit soon) some of the oldest known human settlements occurred. This water has supported some of humanity’s earliest agriculture, cities, and the dreams and follies of kings….Read More

How Europe Works
A New Vision for National Parks

Spain and Sicily on the 38th Parallel