While ash from the volcano in Iceland eclipsed the sky in much of Northern Europe, David and Janet Carle explored the volcanic Azores islands in the Atlantic, looking at worldwide water issues along the 38th parallel. In Sao Miguel they visited a geothermal plant that provides 40% of local power, and tested the waters in a thermal mineral pool. On mainland Portugal they visited the barragem (dam) on the Guiadiana River, which creates the largest reservoir in Europe and that required an entire town to be moved to higher ground. After crossing through Spain and back into Portugal, they saw the the world’s largest solar energy generator, many storks, and a “solar donkey”. 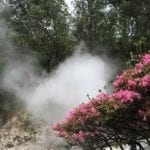 Volcanic Islands of the Atlantic—The Azores

The first thing we learned was how to pronounce the name of the islands—”eh-shurs” in Portuguese. The second thing was getting our heads around the fact that we are WAY out in the Atlantic, 940 miles from the Portuguese mainland, and thousands of miles from Assatague Island, the closest land to the west. One can’t go more than a few miles without a glimpse of the ocean, a constant reminder that this is an island in a very big sea…. Read More 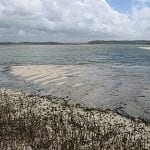 We flew from the Azores to Lisbon, 2 hours late perhaps because of all the air delays due to volcanic ash in northern Europe. Got our rental car and drove south to rejoin the 38 degree latitude line at Sines (pronounced “seench.”) and stayed in a small fishing town nearby called Porto Covo. Sines is the birthplace of Vasco de Gama, the seafarer who actually FOUND the ocean route to India from Europe…. Read More

The Transported Town and Solar Donkey

From the little town of Moura, where we appeared to be the only tourists, we visited the Barragem (“dam,” see last blog) up close and personal. The countryside is lovely, rolling hills carpeted with wildflowers of every color and hillsides of olive trees. The dam itself isn’t huge, but the reservoir behind it is the largest in Europe. Much land was inundated in the process of filling the lake….Read More

Spain and Sicily on the 38th Parallel