By Amy Edwards, author of Are We Rich Yet? The Rise of Mass Investment Culture in Contemporary Britain

My friends and family sometimes ask me why I have chosen to spend the last ten years of my life studying the history of finance. It’s a good question. To them I’m sure it seems a bit of an odd fit. At school I was always more interested in arts and humanities, leaving maths and science to my brother who seemed to understand them in a way I never did. As an undergraduate, I didn’t study much economic history, focusing instead on political and social history.

To be clear, financial history is important, yet my own historical interests do not stem from a deep interest in the financial specifically. I am indebted to the work of many great economic and financial historians who have furthered our understanding of the ways that things like consumer credit, bond markets, inflation, economic theory, government attitudes to debt, and the primacy of shareholder value have shaped the history of contemporary societies. But I discovered this literature later in my academic career. When I began researching late-twentieth-century Britain as a Masters student in 2011, the thing that most interested me was the relationship between ordinary people and political ideas. I wanted to better understand political marketing, and how politicians used familiar cultural references to encapsulate complex ideas and attach emotion to seemingly uninspiring policies. I was particularly fascinated by the political marketing of Conservative Prime Minister, Margaret Thatcher, who famously hired advertising company Saatchi & Saatchi to run her election campaigns.

It was in this context that I studied the Conservative Party’s attempts to ‘sell’ the notion of share ownership to the British people during the 1980s, and my Masters dissertation ended up being a close study of the campaigns that accompanied Thatcher’s programme of privatisation. In the late twentieth century, financial markets became a genuinely national talking point. Some of the major events of the decade involved them – Big Bang and the deregulation of the stock market, the 1987 stock market crash, the takeover scandal at Guinness. Ask most British people of a certain age if they remember anything about Thatcher’s economic reforms and chances are they will mention British Gas and the infamous character used to advertise its 1986 flotation, Sid. Indeed, my own parents were among the millions of people who purchased privatisation shares in the 1980s. I wanted to know how a national government had managed to get ordinary people like them interested in stock markets, share ownership and financial investment.

In many ways, the questions that underpin my new book Are We Rich Yet? focus on when, why, and how the ‘financial’ became such a significant part of British society. When I started looking for signs of more widespread engagement with financial institutions and investment amongst the British public, it turned out that finance was everywhere in late-twentieth century British culture (as it is today). Financialization —that is, the growing power of financial institutions, values, and technologies over individuals, firms, and the macro-economy— has a history that is material and tangible. Stock markets turned up in boardgames, popular sitcoms, the lyrics to hit songs, and the plots of best-selling novels. I started asking relatives if they had ever owned a Filofax, and what the term ‘yuppy’ meant to them, while my colleagues were forced to recount tales of youths spent working minimum wage jobs at banks.

Much of this cultural ephemera was, of course, a response to the popularity of privatisation and Margaret Thatcher’s government certainly had a part to play in the rising power of financial capitalism in Britain. But, if Thatcher’s privatisation marketing campaigns of the 1980s were a success, it was because she was pushing at an already open door. Financialization has roots that long pre-date Thatcher’s rise to office. Looking at its social and cultural formations very immediately shows that what happened in the 1980s was the acceleration of an already-existing process. As any Victorianist will tell you, fictional tales of stock market speculation gone awry are hardly an invention of novelists from the eighties. For most of the post-war period, in fact, Britain’s financial press tried to court small investors and financial institutions sought ways to transfer workers’ end of month earnings into savings and investments funds.

In this way, although my own starting point for a journey into the financial history of Britain was Margaret Thatcher, she probably shouldn’t be the starting point for a study of financialization in Britain. Rather we might usefully look towards changes in the more everyday interactions between people, financial markets, and the culture that surrounded them across the twentieth century if we want to understand the dominant place that financial institutions maintain in society today. So if you see Sid, tell him…

CATEGORIES: Economics, From Our Authors, History

Why Airports Are Places We Should All be More Interested In
Overturning New York Times vs. Sullivan Would Endanger Freedom of Speech 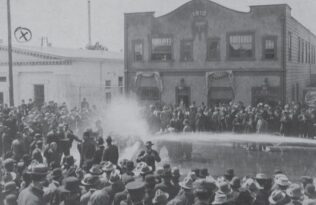