By Brian Catlos, co-author of The Sea in the Middle: The Mediterranean World, 650–1650

If Medieval Studies, as some say, has a “whiteness problem,” Mediterranean Studies does not. Recentering the narrative of the pre-Modern West on the region of the sea and the lands that surround it better reflects the historical processes that shaped the world of the Middle Ages —a world which was bridged rather than divided by the frontiers between the Latin, Byzantine and Islamic worlds. It also obliges us as to perceive and acknowledge the role played by peoples and cultures of Africa, West Asia and Europe in laying the foundations of the modern world, and appreciate the deep integration of Christian, Muslim and Jewish societies and cultures. This is not some rose-tinted view of the past, but a complex and messy history that was frequently punctuated by violence, but also characterized by deep and long-standing collaborations. Seeing the Middle Ages from this view point strips away the paradigmatic veneer of civilization and nation which has obscured our view of the past, and allows us to see it as it was – a history of people no less complex and cosmopolitan that us today.

This is a vision which resonates intuitively with the diverse student communities of today’s academia, many of whom embody the multiplicity of shifting identities that Mediterranean Studies so effectively teases out. It invites them, whatever their own origins, to see the Middle Ages as their history too. The Middle Ages ceases to be about Christian Europe and “the Other,” and becomes a story about “us.”

I experienced this firsthand as I taught two classes using The Sea in the Middle: the Mediterranean World, 650–1650 and its accompanying source reader, Texts from the Middle: Documents from the Mediterranean World, 650–1650, which I co-wrote and co-edited together with Thomas Burman and Mark Meyerson. While the courses were very different — a 15-week medieval/early modern survey, and a joint graduate-undergraduate seminar on intersectionality, which focused on the pre-Modern Mediterranean — the students all responded to the texts with enthusiasm and appreciation.

So how did I structure my courses? And how can other instructors use the books in their own classes?

The survey course ran at a pretty tight clip, meeting twice per week, and covering thirteen of the chapters systematically while leaving two thematic chapters for the students to study on their own. Each week, students read the chapter in question and responded to three or four study questions, and to the questions relating to the chapter’s “Artifacts” prior to the lecture in question. (Each chapter has two or three sets of Artifacts —texts or objects relating to the main themes.) Students received full marks for submitting their responses, which required at least two pages or so of writing each week. I let them know that these same questions would appear on the three mid-terms, so they were motivated to complete them.

Since the students had reviewed the material in advance, I used the lecture time to discuss the artifacts in detail, fill in background information and run off on interesting tangents like discussing the nature of money, the political impacts of royal polygamy vs. royal monogamy, the role of eunuchs in Mediterranean society, the impact of climate on history, and more. I made sure my presentations had lots images and maps to keep our geographically-starved students conscious of where things were happening and give them some help visualizing the people and places of the day. All of the mid-terms and the final were both open book and open internet, meaning students had no reason to get flustered or confused by foreign sounding names, and were instead forced to concentrate on understanding historical processes.

The second session each week was led by the students and based on source readings. Each chapter has five to seven sets of sources. Every week I assigned a number of students to each set, and they prepared a one-page report based on the discussion questions in the reader. In class we ran through the various document sets with the assigned students taking the lead for their set. The other students did a report on the set of their choosing. Once again, reports were given full marks if submitted, and the fact that document-related questions also appeared on mid-terms served as an incentive to diligence.

This writing and discussion-driven approach to the course helped keep the students active and engaged, and there were many instances where we found ourselves drawing modern parallels and discussing contemporary issues. Most importantly, the students — whatever their background — became invested in the material. Contrary to my reservations, they did not find themselves getting lost in the inevitable myriad of foreign-sounding names and obscure places. In their post-course evaluations — the best I have ever received for an undergraduate survey — the students consistently remarked on their engagement with the material and its relevance to their own experience.

What surprised me even more was how useful The Sea in the Middle proved in the seminar environment. At the first session of the seminar, it became clear that most students had little or no background in the pre-Modern in general, or in Islam or Judaism in particular. (Our Religious Studies department focuses on East and South Asian religions and contemporary US Christianity). In response, I assigned The Sea in the Middle as our reading for the next three weeks. For each session, the students would write a report on one of the book’s three parts, which we would discuss in class alongside my own lecture. By week four, we were ready to go. At that point, all of the students had a foundational understanding of the broad currents of the history of the pre-Modern West —a basis for exploring themes of intersectionality that were of interest to them and related to their main fields of study.

Based on this experience, I plan on assigning the book as the  supplementary/introductory text for the thematic seminars I do. And while I tend to focus on social and economic history and questions of identity and communal relations, I believe the book could serve the same purpose in seminars on other topics. Starting off with The Sea in the Middle would provide students in seminars on medieval art, literature, gender or politics, with a broad context introduction to serve as a foundation for the course.

All of this said, a course on the Medieval Mediterranean might seem daunting not just to students, but also faculty: the prospect of wrangling Byzantine, Latin European and Islamic history and the cultures of Judaism, Islam and Christianity over the course of a thousand years can be intimidating even to trained medievalists. For that reason, our author team will soon be launching a community website for instructors using the book, including discussion boards, assignments, study questions, maps and images and other resources. The time is ripe for a new approach to pre-Modern history and The Sea in the Middle will make it not only possible, but enjoyable for university and college instructors to teach this new Mediterranean Middle Ages. 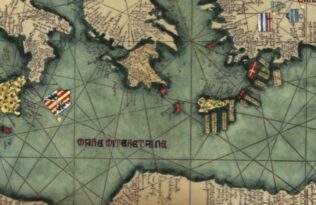 Integrating Islamic and European history – The Sea in the Middle and the new Middle Ages. 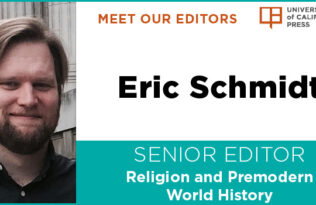 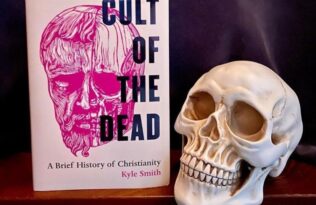 The Deep History Lurking Behind Halloween