By Armond R. Towns, author of On Black Media Philosophy

Carothers’s reasoning was a classic social Darwinian argument in its early twentieth century form. He argued that the Kenyans were tribal—meaning oral and without “civilized” writing capacity. They were struggling with colonization because they were not used to change. According to Carothers, Europeans were detribal and had moved out of an oral past to a civilized state thanks to mechanical media like the phonetic alphabet and Gutenberg’s movable-type printing press. Carothers suggested that the European detribal state was the height of humanity, and colonization was a difficult but necessary project to bring the Kenyans up to speed. Another way to say this: Carothers believed that the Kenyans were merely derivative of white people. Kenyan tribalism was simply a stage Europe already evolved through, and it was of historical necessity for Kenya—and the rest of Africa—to move forward.

We must consider Carothers’s contributions to British colonial endeavors in our understanding of media studies. In the 1960s, the important Canadian media scholar Marshall McLuhan directly pulled from Carothers’s work to build what I call a “media philosophy.” McLuhan celebrates Carothers less for his statements on colonialism and more for his media technological assumptions of humanity. Yet in my new book On Black Media Philosophy, I ask: can colonialism ever be fully separated from McLuhan’s work on media and humanity?

McLuhan would add “retribal” media to Carothers’s model. McLuhan argued that electricity transformed the oral (tribal) and the mechanical (detribal) worlds. Electronic media would institute a retribalization, as the communality associated with tribal media was now zapped into your home through the television. In other words, McLuhan believed that the capacity for us all to watch the same thing at the same time acted similarly to orality. He thought it would create a community, a “global village” of watchers, who find commonality around shared behavior.

But inherent in McLuhan’s thought and his media philosophy is African colonization—the framework of black people as inferior. What do we do with the colonial implications of this intellectual legacy, a foundation for communication and media philosophies?

I refuse to dismiss McLuhan altogether for two reasons, both of which essentially structure On Black Media Philosophy. First, we must understand the epistemological foundations of our academic fields. Many of these fields were formulated in the late-nineteenth century, based on the increasing fragmentation of academia, a response to the Western age of industrialism. At this moment, in and outside of academia, we also saw the rise of social Darwinism—the argument that certain human groups were naturally ahead of others (on the linear scale of, for example, tribal, detribal, and retribal). Dominant concepts of knowledge became and remain inherently structured by Europeans in our academic disciplines, which, based on Europe’s “scramble for Africa” and other colonial ventures around the same time, would always be racial. The first part of my book concerns the conflation of McLuhan’s concept of tribal with the Negro, even as he often did not say so explicitly.

The second reason I refuse to throw McLuhan out is because he provided one useful route to media materiality, which is often missing from black media studies that focus on representations. If we take McLuhan seriously, we must also study how the transformation of concepts of time and space via media impact our self-conception, racially and beyond. With a materialist understanding of media, we can ask: how do people deploy media to point toward a world beyond European racial categorizations? This question lies at the heart of a black studies and cultural studies tradition, one that holds that while Europe situated itself as the epitome of knowledge, people of different races, classes, and genders would show that Europe held no monopoly on knowledge. Interestingly, this was evident during McLuhan’s time in the 1950s and 1960s, as African decolonization movements and black people’s rebellions throughout the Americas spread. Decolonization would also roll through Asia and Latin America, socialism would provide a realistic push against the dominance of capitalism, and the rise of multiple “studies” would begin to forever change the project of knowledge (black studies, women’s, gender, and sexuality studies, and more).

On Black Media Philosophy takes seriously this two-part project. It focuses on understanding the racial-epistemological project of Europe and its reliance on media concepts, while examining the ways that black people have fundamentally altered the world in our resistance to Euro-American dominance. 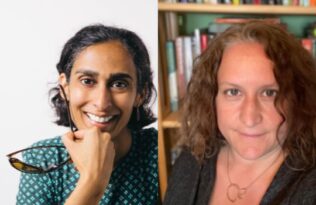