For this year’s Asian Pacific American Heritage Month, our authors reflect on the the verbal and violent hate crimes against AAPI communities, which increased over the last couple years with the outbreak of COVID-19. With these sad events — the recent expressions of a long legacy of racism in the U.S — came public conversations and resistance from AAPI communities.

Authors Moon-Ho Jung and Nobuko Miyamoto share how they currently feel about the future for AAPI communities, and how we can move forward.

“On April 4, 1967, exactly one year before his assassination, Martin Luther King Jr. broke his public silence on the Vietnam War. In that remarkable speech, he identified the US government as “the greatest purveyor of violence in the world today.”

As we witness horrific acts of anti-Asian violence today, I believe it is critical that we take King’s words to heart. There has been no greater force in carrying out anti-Asian violence than the US government, which has been responsible for the killing of millions of Asian peoples, from the Philippine-American War to World War II, the Korean War, the Vietnam War, and beyond.

Why do so many people feel no remorse in spewing anti-Asian hatred and committing anti-Asian violence? To begin to address that question, we have to listen to King’s piercing insight.”

Moon-Ho Jung is Professor of History at the University of Washington and the author of Menace to Empire: Anticolonial Solidarities and the Transpacific Origins of the US Security State and Coolies and Cane: Race, Labor, and Sugar in the Age of Emancipation. Read his essay on “The Deeper History of Empire and White Supremacy Behind Anti-Asian Racism” and his recent Washington Post op-ed, “Is it possible to condemn one empire without upholding another?“

“I’m performing in June 18, 2022 for the Vincent Chin 40th Remembrance and Rededication conference, in Detroit, where he was brutally murdered. Here’s a draft of a new song I’m writing for the event.  It carries what I’m feeling these days about Asian Hate.”

GOT A TARGET ON MY BACK

It wasn’t the first and it wasn’t the last
How do we get past this history
Of don’t have a Chinaman’s chance
From old Chinatown lynchings
To 2020’s Atlanta killings
From New York to LA – the insults, the beatings
Deep in the ignorant mind it waits
Why are we so easy to hate?

BE WARE, BE SEEN, BE STRONG, BE HEARD
LET’S TAKE THE TARGET OFF OUR BACKS!

A veteran of both Broadway and the protest line, Nobuko Miyamoto is an iconic Asian American artist and activist. Growing up in the 1940s as a third-generation Japanese American “without a song of my own,” she found her voice in the 1960s through the revolutionary movements occurring in the U.S. and abroad. In 1973, she co-created the seminal album A Grain of Sand: Music for the Struggle by Asians in America (Paredon), widely recognized as the first such compilation of Asian American music. With neither guideposts nor role models for reference, Nobuko improvised her own artistic path as a songwriter, dancer, and theater artist. Across five decades, she forged a creative practice that thrives on collaboration and continues today with a fire for justice.

Nobuko is the author of Not Yo’ Butterfly: My Long Song of Relocation, Race, Love, and Revolution, an intimate and unflinching account of her life story and also foregrounds the struggles of people of color who reclaimed their histories, identities, and power through activism and art. 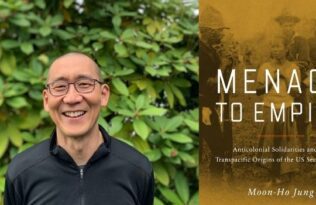