Noah Tsika is Associate Professor of Media Studies at Queens College, City University of New York. He is contributing editor of Africa Is a Country and the author of several books, including Traumatic Imprints and Nollywood Stars. He is also a first-generation scholar.

Cinematic Independence traces the emergence, demise, and rebirth of big-screen film exhibition in Nigeria. Film companies flocked to Nigeria in the years following independence, beginning a long history of interventions by Hollywood and corporate America. The 1980s and 1990s saw a shuttering of cinemas, which were almost entirely replaced by television and direct-to-video movies. However, after 1999, the exhibition sector was revitalized with the construction of multiplexes. Cinematic Independence is about the periods that straddle this disappearing act: the immediate decades bracketing independence in 1960, and the years after 1999. At stake is the Nigerian postcolony’s role in global debates about the future of the movie theater. That it was eventually resurrected in the flashy form of the multiplex is not simply an achievement of commercial real estate, but also a testament to cinema’s persistence—its capacity to stave off annihilation or, in this case, come back from the dead.

How did you first become interested in this topic?

As a historian of both Hollywood and Nollywood, I’ve long been interested in how the two industries intersect. Cinematic Independence was born of my desire to particularize these intersections—to make concrete an understudied set of political, economic, and cultural connections between Nigeria and the United States. I was also motivated by the desire to correct false assumptions about Nigeria’s irrelevance to Hollywood capital (and thus to the field of film and media studies, which, as I’ve argued elsewhere, generally ignores the African continent). I wanted to show just how active Hollywood companies have been in Nigeria since at least the 1950s, and how their presence both facilitated and stymied the development of indigenous filmmaking. I wanted to link the present, in which multiplexes increasingly dot the entertainment landscape of Nigeria, to the past, when the construction of state-of-the-art movie theaters was very much a shared goal of Hollywood representatives and postcolonial Nigerians.

What was something unexpected that you learned while working on the book?

Before researching this book, I had never heard of CineDomes—“economy cinemas” that consisted of plastic-and-nylon “aero-tents” blown up like giant balloons. These were mobile movie theaters that served to introduce Nigerians to Cinerama and other widescreen film formats in the early 1960s. (They were also meant to circumvent some of the challenges associated with Nigeria’s tropical monsoon climate.) Nor had I heard of Multitrax, a patented language-conversion projection system developed specifically for the multilingual Nigerian market around the same time. The brainchild of a Hollywood-based company, Multitrax incorporated five separate magnetic soundtracks—each in a different language—on the edges of 16mm prints. Projectionists could select which track to play, but simultaneous playback of all tracks was also possible with the use of earphones for “mixed” audiences. Such was the excitement of post-independence Nigeria: it inspired a remarkable array of experiments in film technique and technology. I so enjoyed learning, through the history of Nigeria, how architecturally varied the movie theater has been. It was also thrilling to discover the non-cinematic uses of movie theaters like the Rex in Enugu and the Emy in Aba, which played host to a number of political events in the 1950s, from conferences on women’s rights to various anticolonial assemblies.

How does your book help explain the current role of Nigeria’s film industry?

Cinematic Independence shows how Nollywood — whose emergence as a direct-to-video industry in the early 1990s was in part a symptom of mass theater closures in Nigeria — is now very much a big-screen force at certain echelons. That Nigerian films are now shown on the biggest Nigerian screens was by no means inevitable. My book reveals how these circumstances came about, and why some Nigerians are ambivalent about this development. On the one hand, this is a specific Nigerian achievement—a triumph that helped mark the ostensible return of democratic rule in the twenty-first century, after a sixteen-year stretch of military dictatorship. (Crucial startup funds and other loans came from the Nigerian government, and Nigerian-born executives initiated the construction of multiplexes in 2004.) On the other hand, Hollywood —and to a lesser extent, Chinese — capital is implicated in the rise of the multiplex in Nigeria. Theater equipment comes from North American companies; Disney, Warner Bros., Coca-Cola, and Pepsi are among the foreign giants that dictate everything from programming decisions to design and management schemes. Nigeria’s largest exhibitor is also part of a vertically integrated Nigerian company, which makes it difficult for independently produced Nigerian films to find screen space.

As anyone in the field of film and media studies knows, vertical integration—the consolidation of film production, distribution, and exhibition—is nothing new. Cinematic Independence reveals how Hollywood companies established vertically integrated precedents in Nigeria as early as the colonial era, in many cases through the use of Lebanese merchants and other middlemen who represented their interests in the distribution and exhibition sectors. Vertical integration, with its characteristic practice of block booking, was perfectly permissible abroad even in the wake of the Paramount antitrust decision of 1948, and Hollywood firms pursued it with particular avidity in Nigeria. That’s just one example of how the history examined in Cinematic Independence sheds light on the current landscape of theatrical film in Nigeria.

I hope that readers will gain a sense of just how dynamic the history of theatrical film has been in Nigeria, and of how deeply relevant that history is to a more “general” film aesthetics and film theory. By the mid-1960s, Lagos (Nigeria’s federal capital at the time) was one of only seven official Motion Picture Export Association of America outposts abroad. It joined London, Paris, Frankfurt, Rome, Rio de Janeiro, Tokyo, and Jakarta. That’s how significant post-independence Nigeria was to “global Hollywood.” The country’s rich history has much to teach us. It has never been as peripheral as some might assume. Its centrality—its direct relevance to film history, film aesthetics, and film theory—is well worth keeping in mind. To accept this significance is not only to de-exoticize and de-pathologize Nigeria and Nigerians but also to begin to understand something of Africa’s importance to the development of the medium of film.

What advice do you have for other first-generation scholars hoping to publish a book?

I’m a first-generation college graduate. My family doesn’t have a college-going tradition. But my parents understood and supported my desire to pursue higher education. They made many sacrifices to send me to college. The institution from which I eventually graduated also helped with generous aid packages designed to assist low-income first-generation students. For me, publishing a book is one way of demonstrating the consequences—intellectual and otherwise—of such generosity.

To a first-generation scholar, it can sometimes seem as if others in the academy have had job offers and book contracts since birth. It’s hard to know how academia works if you’re a first-generation student. You may sense that your fellow students enjoy an inside knowledge of the process—a kind of congenital familiarity that you just don’t share. It’s easy to feel insecure about that. But don’t be afraid to ask your advisors and other mentors to walk you through the process of publishing a book. Many are happy to help but will only do so if asked.

Those of us who lack family connections have had to rely on our teachers and other professional mentors for assistance navigating deeply unfamiliar terrain. Just as I would not have known about the institutional support available to me as a first-generation college applicant had it not been for my high-school guidance counselors, I would not have known how to find the appropriate press, or when, how, and with what materials to contact an editor, without the step-by-step advice of the professors who guided me through college and graduate school. 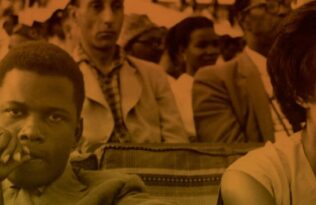 Nigeria Shows How the Silver Screen Can Be Saved