UC Press is proud to publish award-winning authors and books across many disciplines. Below are some of our recent award winners from December 2021 – January 2022. Please join us in celebrating these scholars by sharing the news!

Salih Can Açiksöz is Assistant Professor of Anthropology at the University of California, Los Angeles.

Sacrificial Limbs chronicles the everyday lives and political activism of disabled veterans of Turkey’s Kurdish war, one of the most volatile conflicts in the Middle East. Through nuanced ethnographic portraits, Açiksöz examines how veterans’ experiences of war and disability are closely linked to class, gender, and ultimately the embrace of ultranationalist right-wing politics. Bringing the reader into military hospitals, commemorations, political demonstrations, and veterans’ everyday spaces of care, intimacy, and activism, Sacrificial Limbs provides a vivid analysis of the multiple and sometimes contradictory forces that fashion veterans’ bodies, political subjectivities, and communities. It is essential reading for students and scholars interested in anthropology, masculinity, and disability.

Kaira M. Cabañas is Professor of Global Modern and Contemporary Art History at the University of Florida, Gainesville. She is the author of The Myth of Nouveau Réalisme: Art and the Performative in Postwar France; Off-Screen Cinema: Isidore Isou and the Lettrist Avant-Garde; and Learning from Madness: Brazilian Modernism and Global Contemporary Art.

Immanent Vitalities: Meaning and Materiality in Modern and Contemporary Art

A new reality for the art object has emerged in the world of contemporary art: it is now experienced less as an autonomous, inanimate form and more as an active material agent. In this book, Kaira M. Cabañas describes how such a shift in conceptions of art’s materiality came to occur, exploring key artistic practices in Venezuela, Brazil, and Western Europe from the mid-twentieth century to the present. Immanent Vitalities expands the discourse of new materialisms by charting how artists, ranging from Gego to Laura Lima, distance themselves from dualisms such as mind-matter, culture-nature, human-nonhuman, and even Western–non-Western in order to impact our understanding of what is animate. Tracing migrations of people, objects, and ideas between South America and Europe, Cabañas historicizes changing perceptions about art’s agency while prompting readers to remain attentive to the ethical dimensions of materiality and of social difference and lived experience.

Matilde Córdoba Azcárate is Associate Professor in the Communication Department at the University of California, San Diego.

Stuck with Tourism: Space, Power, and Labor in Contemporary Yucatan

Tourism has become one of the most powerful forces organizing the predatory geographies of late capitalism. It creates entangled futures of exploitation and dependence, extracting resources and labor, and eclipsing other ways of doing, living, and imagining life. And yet, tourism also creates jobs, encourages infrastructure development, and in many places inspires the only possibility of hope and well-being. Stuck with Tourism explores the ambivalent nature of tourism by drawing on ethnographic evidence from the Mexican Yucatán Peninsula, a region voraciously transformed by tourism development over the past forty years. Contrasting labor and lived experiences at the beach resorts of Cancún, protected natural enclaves along the Gulf coast, historical buildings of the colonial past, and maquilas for souvenir production in the Maya heartland, this book explores the moral, political, ecological, and everyday dilemmas that emerge when, as Yucatán’s inhabitants put it, people get stuck in tourism’s grip.

Neve Gordon is Professor of Human Rights and the Politics of Humanitarian Law at Queen Mary University of London. He is the author of Israel’s Occupation and coauthor of The Human Right to Dominate.

Nicola Perugini is Senior Lecturer in International Relations at the University of Edinburgh. He is the coauthor of The Human Right to Dominate.

Human Shields: A History of People in the Line of Fire

From Syrian civilians locked in iron cages to veterans joining peaceful indigenous water protectors at the Standing Rock Sioux Reservation, from Sri Lanka to Iraq and from Yemen to the United States, human beings have been used as shields for protection, coercion, or deterrence. Over the past decade, human shields have also appeared with increasing frequency in antinuclear struggles, civil and environmental protests, and even computer games. The phenomenon, however, is by no means a new one.

Shenila Khoja-Moolji is Assistant Professor of Gender, Sexuality, and Women’s Studies at Bowdoin College. She is the author of the award-winning book Forging the Ideal Educated Girl: The Production of Desirable Subjects in Muslim South Asia.

Sovereign Attachments rethinks sovereignty by moving it out of the exclusive domain of geopolitics and legality and into cultural, religious, and gender studies. Through a close reading of a stunning array of cultural texts produced by the Pakistani state and the Pakistan-based Taliban, Shenila Khoja-Moolji theorizes sovereignty as an ongoing attachment that is negotiated in public culture. Both the state and the Taliban recruit publics into relationships of trust, protection, and fraternity by summoning models of Islamic masculinity, mobilizing kinship metaphors, and marshalling affect. In particular, masculinity and Muslimness emerge as salient performances through which sovereign attachments are harnessed. The book shifts the discussion of sovereignty away from questions about absolute dominance to ones about shared repertoires, entanglements, and co-constitution.

Shana Klein is Assistant Professor of Art History at Kent State University. She is the recipient of several research fellowships from the Smithsonian American Art Museum, American Council of Learned Societies, Henry Luce Foundation, and Georgia O’Keeffe Museum, among others.

The Fruits of Empire: Art, Food, and the Politics of Race in the Age of American Expansion

The Fruits of Empire is a history of American expansion through the lens of art and food. In the decades after the Civil War, Americans consumed an unprecedented amount of fruit as it grew more accessible with advancements in refrigeration and transportation technologies. This excitement for fruit manifested in an explosion of fruit imagery within still life paintings, prints, trade cards, and more. Images of fruit labor and consumption by immigrants and people of color also gained visibility, merging alongside the efforts of expansionists to assimilate land and, in some cases, people into the national body. Divided into five chapters on visual images of the grape, orange, watermelon, banana, and pineapple, this book demonstrates how representations of fruit struck the nerve of the nation’s most heated debates over land, race, and citizenship in the age of high imperialism.

Gema Kloppe-Santamaría is Assistant Professor of Latin American History at Loyola University Chicago. She is the lead editor of Violence and Crime in Latin America: Representations and Politics and Human Security and Chronic Violence in Mexico: New Perspectives and Proposals from Below.

In the Vortex of Violence examines the uncharted history of lynching in post-revolutionary Mexico. Based on a collection of previously untapped sources, the book examines why lynching became a persistent practice during a period otherwise characterized by political stability and decreasing levels of violence. It explores how state formation processes, as well as religion, perceptions of crime, and mythical beliefs, contributed to shaping people’s understanding of lynching as a legitimate form of justice. Extending the history of lynching beyond the United States, this book offers key insights into the cultural, historical, and political reasons behind the violent phenomenon and its continued practice in Latin America today.

Maurice Rafael Magaña is a sociocultural anthropologist and Assistant Professor of Mexican American Studies at the University of Arizona.

Richard Weiss is Associate Professor of South Asian Religions at the Victoria University of Wellington. He is author of Recipes for Immortality: Medicine, Religion, and Community in South India.

The Emergence of Modern Hinduism: Religion on the Margins of Colonialism

The Emergence of Modern Hinduism argues for the importance of regional, vernacular innovation in processes of Hindu modernization. Scholars usually trace the emergence of modern Hinduism to cosmopolitan reform movements, producing accounts that overemphasize the centrality of elite religion and the influence of Western ideas and models. In this study, the author considers religious change on the margins of colonialism by looking at an important local figure, the Tamil Shaiva poet and mystic Ramalinga Swami (1823–1874). Weiss narrates a history of Hindu modernization that demonstrates the transformative role of Hindu ideas, models, and institutions, making this text essential for scholarly audiences of South Asian history, religious studies, Hindu studies, and South Asian studies.

Surveillance and Resistance in the Borderlands
Q&A with Christopher Seeds, author of Death by Prison 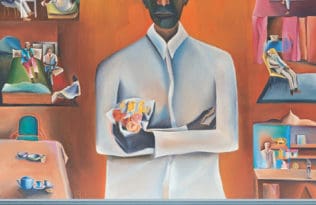