UCP has a strong program in Criminology and Criminal Justice, with several of our authors are participating in the American Society of Criminology’s 2021 Author Meets Critics sessions. Hear from our authors, check-out the latest titles from our criminology list, and connect with our Criminology editor, Maura Roessner.

Jessica Henry, author of Smoke but No Fire: Convicting the Innocent of Crimes that Never Happened

2020 Foreword INDIES Book of the Year Awards Winner, Silver (Political and Social Sciences)
Winner of the Montaigne Medal, awarded to “the most thought-provoking books”

The first book to explore a common but previously undocumented type of wrongful conviction, Smoke but No Fire tells the heartbreaking stories of innocent people convicted of crimes that simply never happened. A suicide is mislabeled a homicide. An accidental fire is mislabeled an arson. Corrupt police plant drugs on an innocent suspect.  A false allegation of assault is invented to resolve a custody dispute. With this book, former New York City public defender Jessica S. Henry sheds essential light on a deeply flawed criminal justice system that allows—even encourages—these convictions to regularly occur. Smoke but No Fire promises to be eye-opening reading for legal professionals, students, activists, and the general public alike as it grapples with the chilling reality that far too many innocent people spend real years behind bars for fictional crimes.

James Binnall, author of Twenty Million Angry Men: The Case for Including Convicted Felons in Our Jury

Today, all but one U.S. jurisdiction restricts a convicted felon’s eligibility for jury service. Are there valid, legal reasons for banishing millions of Americans from the jury process? How do felon-juror exclusion statutes impact convicted felons, jury systems, and jurisdictions that impose them? Twenty Million Angry Men provides the first full account of this pervasive yet invisible form of civic marginalization. Drawing on extensive research, James M. Binnall challenges the professed rationales for felon-juror exclusion and highlights the benefits of inclusion as they relate to criminal desistance at the individual and community levels. Ultimately, this forward-looking book argues that when it comes to serving as a juror, a history of involvement in the criminal justice system is an asset, not a liability.

Alt-Right Gangs provides a timely and necessary discussion of youth-oriented groups within the white power movement. Focusing on how these groups fit into the current research on street gangs, Shannon E. Reid and Matthew Valasik catalog the myths and realities around alt-right gangs and their members; illustrate how they use music, social media, space, and violence; and document the risk factors for joining an alt-right gang, as well as the mechanisms for leaving. By presenting a way to understand the growth, influence, and everyday operations of these groups, Alt-Right Gangs informs students, researchers, law enforcement members, and policy makers on this complex subject. Most significantly, the authors offer an extensively evaluated set of prevention and intervention strategies that can be incorporated into existing anti-gang initiatives. With a clear, coherent point of view, this book offers a contemporary synthesis that will appeal to students and scholars alike.

Joachim J. Savelsberg is Professor of Sociology and Law and holder of the Arsham and Charlotte Ohanessian Chair at the University of Minnesota. He is the author of Representing Mass Violence: Conflicting Responses to Human Rights Violations in Darfur.

How do victims and perpetrators generate conflicting knowledge about genocide? Using a sociology of knowledge approach, Savelsberg answers this question for the Armenian genocide committed in the context of the First World War. Focusing on Armenians and Turks, he examines strategies of silencing, denial, and acknowledgment in everyday interaction, public rituals, law, and politics. Drawing on interviews, ethnographic accounts, documents, and eyewitness testimony, Savelsberg illuminates the social processes that drive dueling versions of history. He reveals counterproductive consequences of denial in an age of human rights hegemony, with implications for populist disinformation campaigns against overwhelming evidence. A free open access ebook is available at www.luminosoa.org.

Lois Presser is Professor of Sociology at the University of Tennessee. She is the author of Been a Heavy Life: Stories of Violent Men and Why We Harm and coeditor of Narrative Criminology: Understanding Stories of Crime with Sveinung Sandberg.

Stories have persuasive powers: they can influence how a person thinks and acts. Inside Story explores the capacity of stories to direct our thinking, heighten our emotions, and thereby motivate people to do harm to others and to tolerate harm done by others. From terrorist violence to “mere” complacency with institutionalized harm, the book weds case study to cross-disciplinary theory. It builds upon timely work in the field of narrative criminology and provides a thorough analysis of how stories can promote or inhibit harmful action. By offering a sociological analysis of the emotional yet intersubjective experience of dangerous stories, the book fleshes out the perplexing mechanics of cultural influence on crime and other forms of harm.

Interested in publishing your book with UC Press? Learn what our Criminology Editor Maura Roessner is looking for and how to connect.

Q&A with Ippolytos Kalofonos, author of All I Eat is Medicine
Essentially Disposable: Lessons from Kampala’s Urban Waste Workers 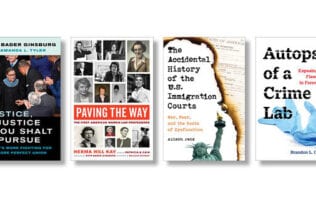