March 15, 2022 would have been the 89th birthday of Justice Ruth Bader Ginsburg, who, for her whole life, was an unwavering champion for women’s rights and social justice. The second woman ever appointed to the Supreme Court, she served for 27 years, from 1993 until her death.

The above clip is from the audio book for Justice, Justice Thou Shalt Pursue: A Life’s Work Fighting for a More Perfect Union, read from the book’s introduction. It quotes Ruth Bader Ginsburg’s confirmation hearing testimony, which she easily won on August 4, 1993. A timeline of her other monumental achievements, personally and professionally, follows.

June 23: Marries Marty at his parents’ home on Long Island

1954 Moves to Fort Sill, Oklahoma, for Marty’s Army service as an artillery school instructor and works in several clerical positions

1956 Enrolls at Harvard Law School, one year behind Marty, as one of nine women students in a class of over 550

1963 Joins the faculty at Rutgers School of Law, State University of New Jersey (one of two women on the faculty)

1972 Joins the faculty of Columbia Law School with tenure

1993 Appointed by President William J. Clinton to the Supreme Court of the United States

2020 September 18: passes away from complications of metastatic pancreatic cancer 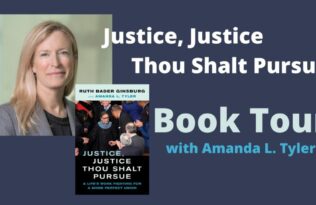 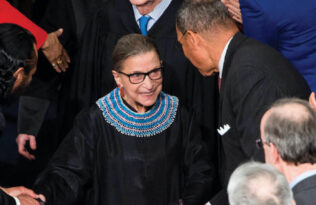