By Reginald Jackson, author of A Proximate Remove: Queering Intimacy and Loss in The Tale of Genji

When I first began working on A Proximate Remove, my goal was to write the book about sexuality, spatial representation, and sensation I wish had existed when I first encountered premodern Japanese literature in college. I found the cultural world of Genji fascinating and puzzled over how things like architectural arrangements of the imperial palace or courtship protocols shaped social encounters.

At the same time, the more I read, the less useful my simplistic American sense of modern heterosexual romance seemed. Sex, however poeticized, was happening everywhere in the classical texts, and it was genuinely fun to try to decipher where, why, and how the courtship surrounding it played out. But binary archetypes like “active pursuing male/passive waiting female” increasingly felt too clunky to tease out subtler dynamics around how desire unfolded and how feeling—in a less linear, intentional, identifiable sense—didn’t parse neatly into love or lust. Plus, so many scenes depicted androgyny or homoerotic attraction even as aristocratic patriarchy appeared absolute. Designations like “straight” and “gay” didn’t help, since characters’ behavior was so fluid. Even as secondary sources helped scaffold my understanding at the time, learning more about the high-stakes game of “Heian marriage politics” and competition to birth male heirs still didn’t do enough to explain all that fluctuation of feeling.

The harder I tried to understand, the more I felt like I was only scratching the surface. The scholarly treatments I turned to weren’t equipped to illuminate all those crevices I wanted to fathom. As I eventually delved into more sophisticated interpretations in Japanese scholarship and Anglophone queer studies after college, those earlier simplifying treatments seemed to do students like me—and even the text itself—a massive disservice.

I wondered about how to address this problem throughout graduate school and afterward. How could I apply some of those interpretive tools I gleaned far removed from premodern Japanese literary studies to texts like Genji? I found gender theory and queer studies interpretations invigorating, and wondered how their conceptualizations of loss, intimacy, and desire might work in the context of premodern Japanese literature. But beyond this methodological dilemma, I wanted to write something students in courses like “Love and Death in Japanese Culture,” “Introduction to World Literature,” “Gender in Japanese Literature and Art,” and “Bodies and Boundaries in Premodern Japan” would get excited about. Many of my students eagerly unpacked how particularities of Heian era clothing, calligraphy, music, seduction, spirit possession, and mourning revealed how desire functioned—or spun out of control. And like me, they were keen to test various hunches and hypotheses about how and why romantic episodes unraveled as they did. Although the Heian courtly context was remote from our contemporary world, so many of its hopes, fears, and motivations mirrored our own. That many of Genji’s early chapter protagonists are in their teens and twenties as relentless relationship drama erupts only heightens students’ intriguing (if misguided) identification with the fictional characters.

Even so, exploring The Tale of Genji can pose lots of difficulties for students of literature or Japanese culture. Often my students found themselves confused by many of the same sorts of details I’d struggled with when I was an undergrad: How to drill down and interpret certain culturally distinct gestures, phrases, and conflicts, without cramming just them into some western schema?

In A Proximate Remove, I focus on close readings of key chapters and pivotal scenes to make it approachable to new readers of the text. Writing to this audience of curious students helped me stay mindful of how to anticipate certain problematic assumptions and amend them. Besides improving our readings by interrogating many modern, culturalist assumptions about premodern Japan, many discoveries along the way strengthened this awareness.

One discovery was how cavalier and mercenary courtiers could be about their sexual encounters, orchestrating them primarily for political gain instead of pleasure or love. Contrary to what we might assume about the nature of sexual orientation as somehow rooted in our individual identity, medieval texts like Taiki (1136–55) foreground just how calculated erotic relations could be—as a form of diplomacy. As I discuss in Chapter 1, “Yorinaga’s text does not reveal some truth of his sexual identity. Rather, the style of aristocratic promiscuity Taiki chronicles queers homosexual by calling the very notion of a stable sexual identity into question. […]Whatever pleasure Yorinaga records, his male-male sexual affairs are not mere expressions of sexual identity or preference; rather, they evidence how shrewdly he hedged his political bets” (42). Examples like this can estrange us—in a good, generative way—from our most familiar assumptions about sexuality. If nothing else, Taiki or Genji encourage us to not apply hastily anachronistic Western labels like “homosexual” to a medieval Japanese context, or to discount a pragmatic lust for power as a driving factor in who beds whom.

Simply put, queer readings of these premodern Japanese texts make us redefine what “desire” means and does. If queer reading involves a “reluctance to take the configuring rhythms of the given world for granted” (1), then A Proximate Remove embodies that gesture by questioning how Heian literary texts or studies of them are interpreted and judged. The book highlights lessons about how intimacy and loss play out from which we might benefit—even a thousand years after Genji was written. One such lesson, taught by the endearingly inept princess, Suetsumuhana, is that not buying into the romantic framework that captivates everyone surrounding us might be an especially sound divestment. In the end, her failure at romance actually becomes an instructive critique of prevailing systems: queer failure we’d do well to study.

These examples give a sense of how A Proximate Remove contributes to ongoing scholarly conversations and can productively revise certain working assumptions within Asian studies and queer studies. Providing a genealogy of how western notions of effeminacy, aestheticism, and respectability narrowed Anglophone appraisals of Heian literature along orientalist, cultural imperialist lines helps Asian studies scholars reconsider how geopolitical and disciplinary histories govern our current understanding. Similarly, analyzing medieval Japanese texts demonstrates the insufficiency of canonical queer studies approaches once anchoring concepts like a Judeo-Christian prohibition on sodomy, capitalist modernity, or heteronormativity no longer apply. Both fields possess blind spots my book highlights and tries to address.

A Proximate Remove is definitely a post-tenure book. In it, I felt more empowered to take risks and I cared less than I did in my first book about appeasing senior scholars. Gaining some distance from those appraisals helped open things up towards new audiences more interested in imaginative readings of captivating stories than territorial pronouncements and posturing. Trying to write more toward a student audience, one I imagined to be more generous and curious, felt liberating. Thus, much of the challenge of this scholarly experiment had less to do with nitpicking secondary scholarship than it did with trying to tease out instructive turns of phrase and interpretations that might free me from stale routines of reading, writing, and teaching. While that freedom proves elusive, writing this book let me pursue it in ways that hopefully inspire readers of various backgrounds and levels of experience to approach the text with fresh questions and critical energy. 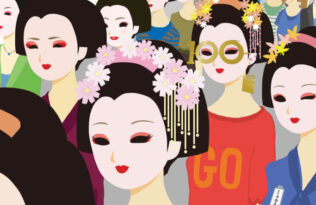 What Geisha Stories Are Popular Today in Japan?