UC Press is spotlighting books that provide context to the struggles and solidarity of women in Afghanistan, the Middle East, and beyond. These books delve into the histories of Muslim feminism past and present as their activism shapes not only the local but also the geopolitical in an uncertain future.

The Pitfalls of Protection
Gender, Violence, and Power in Afghanistan
by Torunn Wimpelmann

Since the 2001 overthrow of the Taliban government in Afghanistan, violence against women has emerged as the single most important issue for Afghan gender politics. The Pitfalls of Protection, based on research conducted in Afghanistan between 2009 and 2015, locates the struggles over gender violence in local and global power configurations. The author finds that aid flows and geopolitics have served as both opportunities and obstacles to feminist politics in Afghanistan. Showing why Afghan activists often chose to use the leverage of Western powers instead of entering into either protracted negotiations with powerful national actors or broad political mobilization, the book examines both the achievements and the limits of this strategy.

Reaching beyond sensational headlines, Land of the Unconquerable at last offers a three-dimensional portrait of Afghan women. In a series of wide-ranging, deeply reflective essays, accomplished scholars, humanitarian workers, politicians, and journalists—most with extended experience inside Afghanistan—examine the realities of life for women in both urban and rural settings. They address topics including food security, sex work, health, marriage, education, poetry, politics, prisoners, and community development. Eschewing stereotypes about the burqa, the contributors focus instead on women’s empowerment and agency, and their struggles for peace and justice in the face of a brutal ongoing war. A fuller picture of Afghanistan’s women past and present emerges, leading to social policy suggestions and pragmatic solutions for a peaceful future.

BIOGRAPHY, RECLAIMED: LOOKING BACK AT THE ABBÉ GRÉGOIRE AND THE FRENCH REVOLUTION
How Queer Readings of Premodern Japanese Texts Help Us Redefine Desire 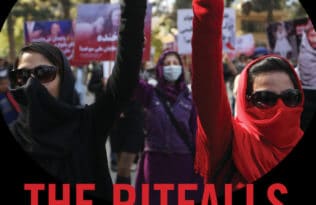