As part of our ongoing Editor Spotlight Series, we interviewed UC Press Editor Kate Marshall about her approach to acquiring in the fields of Anthropology, Food Studies, and Latin American Studies, and what drew her to those areas. Kate also explains her career trajectory as an editor, some common advice she gives to authors, and a creative new pastime she acquired during the pandemic.

Read on to find out more about what Kate is looking for and how to connect.

How did you become an editor at UC Press?

I moved to the Bay Area to study Latin American history at UC Berkeley. Like a lot of graduate students, I experienced something like an existential crisis and took what I thought would be a short break from school after I finished my Master’s degree. In need of a job, I interviewed to be my colleague Naomi Schneider’s assistant, an exciting opportunity to work with scholars on field-defining books! I was sold on publishing as a possible career path, but a different candidate was hired for the open position.

A few months later, then editorial director Sheila Levine asked me to apply for a new position as her assistant and I got that job. One of the hardest things about publishing can be getting your foot in the door. While my first role at the press was largely administrative, I started acquiring a few titles each season under the food studies umbrella and took over the list when Sheila retired. Over time, as my role expanded, I took on other lists, including Latin American studies and anthropology.

Can you tell us a little about the history of the fields you acquire in?

I started acquiring books in food studies in the late aughts during what felt like the peak foodie moment in San Francisco. Food was at the center of many Bay Area cultural events and, hedonistically, it was a lot fun. But it didn’t take long to realize that the conversation about food was also political. UC Press had a lot of success publishing Marion Nestle and her seminal book Food Politics, so I knew we were in a great position to launch authors writing about problems in our food system. I worked hard to expand our very culture-focused list to include more books on issues like labor, the environment, and food justice. I’m proud of the politically-engaged and explicitly-progressive books like Jennifer Gaddis’s The Labor of Lunch. I love how such books complement our longstanding collection of titles on food and wine culture.

I took on the Latin American studies program a few years later because of my academic background. Nearly all editors at UC Press acquire books in Latin American studies, but one of my key contributions has been the relaunch of our Latin American history list, a field the press had been out of for more than a decade despite a stellar backlist. The Latin American history program is small but mighty, home to about 5 or 6 new titles each year and many award winners. Jessica Graham’s Shifting the Meaning of Democracy, for example, just won a sixth prize, including the Bryce Wood Book Award, LASA’s top honor!

In 2017, I took on anthropology, too. Within food studies and Latin American studies, I published several successful books by anthropologists, including Heather Paxson’s The Life of Cheese, Jason De León’s The Land of Open Graves, and Sarah Besky’s The Darjeeling Distinction, among others. When UC Press needed a new anthropology editor, I was asked to take the list on. It’s a huge, longstanding program, and the most challenging area for me because the field has a way of communicating ideas that can be difficult to parse for a nonspecialist. But each day I learn from my authors and I, in turn, challenge them to embrace accessible language, particularly when developing ethnographies. Good ethnographic writing offers a powerful way of telling stories about the human experience and I am moved to tears by manuscripts often. As much as I hate to suggest that crying at one’s desk is a professional highlight, working on an exceptional ethnography is a gift.

How do the lists in anthropology, Latin American studies, and food inform each other? What connections do you see across your lists?

Occasionally, I publish a book that hits all three areas, such as María Elena García’s Gastropolitics and the Specter of Race. But the main connection across these lists is my commitment to seeking out books that address injustice and inequality in our world. Of course, this is also describing what it is like to work at UC Press. I’m proud to be part of an organization that believes books can change the world. As an editor, there is nothing more thrilling than seeing my authors connect their work to the contemporary political moment and influence public discourse.

How would you describe your approach as an editor?

It took me years to realize that my role isn’t to micromanage the final stages of book writing for an author. There are always some projects where I’m very involved in the early development or editorial revision process, but for most book projects my job is more like being an author’s producer and advocate at the press. I help identify and clarify the core arguments, refine the intro, strategize about the audience, manage peer review, and, most importantly, build excitement for the book within the press. All aspects of book publishing involve coordinating a team of expert professionals. I love being the liaison between my authors and colleagues, bringing everyone together to launch great books into the world.

What’s some advice you often find yourself giving to authors?

I think authors tend to undersell themselves when they pitch their books to editors. If you are an author, think of the press as your partner who is working with you to position the book in the marketplace. Recognize that you are an important part of the package, so we need to know about you and what drives your research. The easiest way to help us get to know you is to include an author bio in your proposal. Tell us who you are, what your platform is like, and what motivates you as a writer and researcher. Be sure to spell out ways you are already connecting with potential audiences. This can include highlighting your social media activity, where you give talks or publish, any relevant activism, or your personal backstory.

What got you through the past year?

At the beginning of lockdown, I was on maternity leave and overwhelmed by having a newborn, a preschooler, and my now remote-working husband in our apartment all day. San Francisco implemented stringent social distancing guidelines that included closing all playgrounds, so I had to find a new way to entertain my preschooler outside. I bought a copy of a quirky book called Stairway Walks in San Francisco and started taking both kids on a daily “staircase hunt.” I’d wear the baby and walk to a new staircase until my older child complained that her “cows hurt.” We found so many breathtaking views and I think my relationship to the city changed for the better.

How can authors get in touch with you?

Send me an email! I try my best to read and respond within a few weeks if I am not out of the office. If we are not already in conversation, I recommend waiting to reach out until you have a proposal and writing sample to share. Our proposal guidelines are here. If your book project is based on a dissertation, please reach out after you start the revision process and be prepared to explain how the dissertation is different from the book. 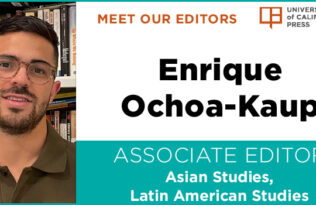 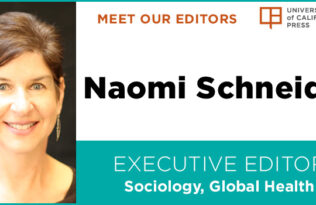