May Day and International Workers’ Day commemorate the 1886 Chicago Haymarket affair and the fight for representation and rights for laborers worldwide — as well as the continuing efforts and struggle of the labor movement. This May Day, UC Press is highlighting titles that shed light on labor that is often invisible and overlooked.

California has held an exceptional place in the imagination of Americans and immigrants since the Gold Rush, which saw the first of many waves of working people moving to the state to find work. From Mission to Microchip unearths the hidden stories of these people throughout California’s history. The difficult task of the state’s labor movement has been to overcome perceived barriers such as race, national origin, and language to unite newcomers and natives in their shared interest. As chronicled in this comprehensive history, workers have creatively used collective bargaining, politics, strikes, and varied organizing strategies to find common ground among California’s diverse communities and achieve a measure of economic fairness and social justice. This is an indispensible book for students and scholars of labor history and history of the West, as well as labor activists and organizers.

Colonial Migrants at the Heart of Empire
Puerto Rican Workers on U.S. Farms
by Ismael García-Colón

Colonial Migrants at the Heart of Empire is the first in-depth look at the experiences of Puerto Rican migrant workers in continental U.S. agriculture in the twentieth century. The Farm Labor Program, established by the government of Puerto Rico in 1947, placed hundreds of thousands of migrant workers on U.S. farms and fostered the emergence of many stateside Puerto Rican communities. Ismael García-Colón investigates the origins and development of this program and uncovers the unique challenges faced by its participants. A labor history and an ethnography, Colonial Migrants evokes the violence, fieldwork, food, lodging, surveillance, and coercion that these workers experienced on farms and conveys their hopes and struggles to overcome poverty.

The Managed Hand
Race, Gender, and the Body in Beauty Service Work
by Miliann Kang

Two women, virtual strangers, sit hand-in-hand across a narrow table, both intent on the same thing-achieving the perfect manicure. Encounters like this occur thousands of times across the United States in nail salons increasingly owned and operated by Asian immigrants. This study looks closely for the first time at these intimate encounters, focusing on New York City, where such nail salons have become ubiquitous. Drawing from rich and compelling interviews, Miliann Kang takes us inside the nail industry, asking such questions as: Why have nail salons become so popular? Why do so many Asian women, and Korean women in particular, provide these services? Kang discovers multiple motivations for the manicure-from the pampering of white middle class women to the artistic self-expression of working class African American women to the mass consumption of body-related services. Contrary to notions of beauty service establishments as spaces for building community among women, The Managed Hand finds that while tentative and fragile solidarities can emerge across the manicure table, they generally give way to even more powerful divisions of race, class, and immigration.

The Labor of Lunch
Why We Need Real Food and Real Jobs in American Public Schools
by Jennifer E. Gaddis

The Labor of Lunch aims to spark a progressive movement that will transform food in American schools, and with it the lives of thousands of low-paid cafeteria workers and the millions of children they feed. By providing a feminist history of the US National School Lunch Program, Jennifer E. Gaddis recasts the humble school lunch as an important and often overlooked form of public care. Through vivid narration and moral heft, The Labor of Lunch offers a stirring call to action and a blueprint for school lunch reforms capable of delivering a healthier, more equitable, caring, and sustainable future. 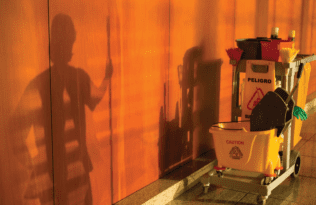