Marjolein Van Bavel’s “Morbo, lucha libre, and Television: The Ban of Women Wrestlers from Mexico City in the 1950s“—published in the current issue of Mexican Studies/Estudios Mexicanos and which we invite you to read for free for a limited time— examines the emergence of the ban on women wrestlers from the sporting spectacle of lucha libre in Mexico City in the 1950s. Set against broader moral preoccupations about the growing popularity and visibility of lucha libre in Mexican society as a result of its broadcasting on television, luchadoras were seen as examples of transgressive femininity. Based on archival research and oral history, the study reveals the social anxieties about gender, class, and race that women wrestlers incited among social-conservative circles. Van Bavel’s article joins the efforts of scholars who write the history of women’s participation and exclusion from sporting activities and contributes to the growing fields of sports studies and studies of mass culture within Mexico. We interviewed Marjolein Van Bavel about her research via email.

In what ways did women lucha libre challenge gender notions about mexicanidad in the 1950s in Mexico?

After the Mexican Revolution, the postrevolutionary governments aimed to reshape Mexican society politically, economically, and culturally. The political and intellectual elites set forth a nationalist campaign that forged a modern nation and national identity known as mexicanidad, which equated Mexican masculinity with virility. Characteristics such as strength, decisiveness, courage, and violence were all naturalized in the concept of Mexican masculinity. As lucha libre became immensely popular among broad sections of Mexican society in the 1930s, it also became imbedded in constructions of mexicanidad. Male wrestlers like Huracán Ramírez and El Santo developed into national heroes and visions of male identity, and soon their images became multi-mediated in print media, wrestling films, and eventually through television. In contrast, Mexican womanhood was—and to a large extend still is—framed within ideals of motherhood and abnegation. As a result, women are expected to be nurturing, passive, self-sacrificing, docile, and fragile. Although the 1920s and 1930s witnessed a certain fascination with chicas modernas who took up sporting activities that transgressed convention (such as wrestling and boxing), the 1940s and 1950s saw a closing up of that space. Women were increasingly pushed back into more conventional gender roles and excluded from sporting activities that were deemed unsuitable for the “weak sex.” In showcasing a combative and all-but-fragile femininity, women wrestlers did not fit within this national identity project of mexicanidad.

In your essay you argue that luchadoras represented an example of transgressive femininity. What alternative forms of gender femininity did they contribute to open?

Las luchadoras contributed to alternative forms of femininity both as athletes and as women. As sportspeople they took up sporting practices that transgressed what was thought of as respectable for women. They did not stick to graceful gymnastics or dancing. Rather, they entered the male world of wrestling gyms and rings. They trained their bodies to become strong and agile, engaged in fast and violent movements, and portrayed aggression and injury on the body. In showcasing muscularity, strength, courage, violence and a lack of fear of pain and injury, las luchadoras embodied characteristics that were thought to belong to the realm of men. As women too, las luchadoras did not comply with traditional gender norms that encouraged them to become domesticated mothers and wives. These were independent working-class women who travelled around the country and world. Their sexuality was not controlled through marriage as it was for many of their contemporaries. Many of them were single mothers and important providers for their (extended) families. Some luchadoras were lesbians. In providing examples of alternative femininity, they helped to open up new possibilities in women’s roles and identities. This explains why authority figures felt it necessary to take away their visibility by banning them from the Mexican capital in the early 1950s.

Your essay relies on oral history to access the memories and voices of famous Mexican women wrestlers in the 1950s. What it was like to meet and interview these pioneering women now in their old age, and how did it shape your understanding of their experience?

From early on in my career as a historian, I have been fascinated by the method of oral history because of the potential that it holds to include otherwise largely unheard voices in the annals of history. Before interviewing luchadoras, I have also conducted oral history research with women bodybuilders and Playboy models. I have always felt it a privilege to listen to the stories and experiences of women, especially of those who lived and worked in ways that placed them at the boundary of societal respectability. The luchadoras recounted fascinating life stories. Irma González—the only known survivor of the pioneering group of Mexican luchadoras that emerged in the late 1940s and early 1950s—and her daughter Irma Aguilar—who went on to become a very successful wrestler in the 1970s, wrestling side by side with her mother—have welcomed me into their home on many occasions. They have shared countless memories, pictures and even original songs with me (often Irma González’s song mandi-mandi-mandilón would be stuck in my head for days). Irma is one of the oldest respondents I have ever interviewed, and this made me acutely aware of the importance of recording her testimonies sooner rather than later. It also presented me with particular challenges due to the deterioration of memory that sometimes comes with old age. Daughter Irma has been aware of her mother’s declining memory for the last few years and saw the interviews as welcome opportunities to exercise her mind. She is also acutely aware of the importance of her mother’s life as a lucha libre pioneer and wants to see it celebrated. I am glad that neither of las Irmas ever seemed to get tired of my many questions and visits. They were always happy to look at the sources that I gathered about their careers and provided me with a rich arsenal of additional information that could not be encountered in such sources. For example, because the veto that banned women wrestlers from the Mexican capital in the early 1950s was never a written rule, few written documents about it can be found. This makes oral history data of crucial importance. It also becomes clear how much these women fought outside of the ring in order to be allowed to fight inside the ring. They are real trailblazers and continue to stand as examples in fearlessness. Las Irmas, but also la Panterita Sureña, Estela Molina, la India Sioux (senior), Tania la Guerrillera and many others serve as a real source of inspiration to me. It feels like an honor to me to share what I learned from them with others and to make sure that their life stories are included within historiography.

National Park Week Reading List
On Recognition and Denial of Injustice in Times of Human Rights Hegemony: Minneapolis and Washington 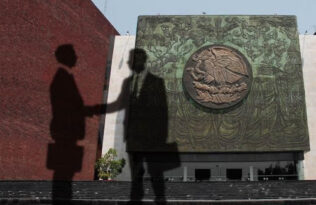