In 1939, at the height of her stardom, the actress Shanta Apte went on a spectacular hunger strike in protest against her employers at Prabhat Studios in Poona, India. The following year, Apte wrote a harsh polemic against the extractive nature of the film industry. Debashree Mukherjee’s “Somewhere between Human, Nonhuman, and Woman: Shanta Apte’s Theory of Exhaustion” published in Feminist Media Histories (FMH), interrogates Apte’s strike and polemic book, embedding Apte’s emphasis on exhaustion within contemporaneous debates on female stardom, industrial fatigue, and the status of cinema as work. The article has been awarded the 2021 Katherine Singer Kovács Essay Award by the Society for Cinema and Media Studies (SCMS). FMH editor Jennifer Bean recently spoke with Mukherjee about her award-winning essay.

Jennifer Bean:  What motivated you to write about Shanta Apte’s hunger strike?

Debashree Mukherjee: I was reading Apte’s book, Should I Join the Movies? (1940) and was really struck by her confident, hugely polemical, authorial voice. In order to situate this strong activist voice I needed to understand her better. That is when I remembered Neepa Majumdar’s essay on Apte’s hunger strike and looked some more into it. The strike took place in 1939 and Apte published the book in 1940; these two events when posed as public forms of political expression started to resonate.

JB:  Do you consider Apte’s activism, her protest against the labor practices in the Bombay film industry of the 1930s, as a form of proto-feminism? Was there a discernible feminist movement in India at this time?.

DM: Indeed, there was a lot of discussion about women’s rights and women’s equality at this time in colonial India. Apte viewed herself as a financially independent, single, working woman with a lot of talent, tapping into local and transnational ideas about gender politics. She lived an unconventional life and felt no hesitation in claiming public space as an intellectual. In her life choices, her sensitivity to human depletion, her refusal to craft a “properly” feminine star aura for herself, and her low threshold for machismo, yeah, I’d say we call her a feminist.

JB: I wonder what Apte would say about this essay—have you ever imagined how she would respond to your analysis?

DM: Ha! What a great question. My knee-jerk response would be to say that she’d shrug it off as academic pretention. But the cool thing about Apte is that she doesn’t seem too interested in boundaries between theoretical reflection, philosophical musing, political action, and vocational hustling. On the other hand, she might be annoyed that I don’t agree with her that exhaustion is an ontological marker of the human.

JB: Can Apte’s “theory of exhaustion” help us think about the “weariness,” “tiredness,” and “fatigue” that many people experience today in response to the ongoing COVID-19 pandemic, perhaps especially in response to the enforced isolation of quarantines/social distancing?

DM: I’ve been thinking about this a lot. I argue in the essay that Apte developed a theory of labor exploitation in cinema by focusing on the exhausted human body. A striking feature of Apte’s theorization is that she cares deeply about the labor of waiting for the next gig, the negative fallouts of being under-employed, even as she writes about fatigue from over-work. In my reading, she presents an ethical vision where care of the body and the mind is central to artistic production, and the onus of care is not solely on the individual, i.e. the worker, but rather she exhorts employers to imagine care and nurture as key to their economic mandate. The pandemic has made me realize the value of these ideas better. Apte reminds us of the importance of maintenance and repair, nurture and care, which have the power to interrupt neoliberal narratives of austerity, self-sacrifice, solo pioneers and linear progress.

This post is published as part of our #SCMS21 blog series. We invite you to visit our SCMS virtual exhibit booth for more information about UC Press’s publications in film and media studies. 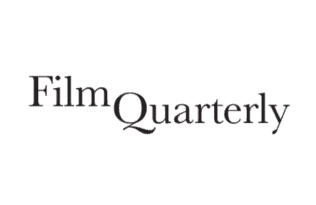 News from Film Quarterly for #SCMS21