The past year was marked by upheaval and activism. And it was marked by sound. From our collectively heightened awareness of birdsong to chants calling for abolition, 2020 was a year defined by aural crisis and calls for justice. A special issue of Resonance, “The Soundwork of Media Activism,” draws upon Michele Hilmes’s concept of soundwork to tune into sound and listening in our experiences of crisis and activism. Resonance‘s co-founding editor, Jay Needham, recently spoke with the editors of “The Soundwork of Media Activism” about how the issue came together and plans for Resonance to continue exploring this theme in another half-issue and an ongoing series in forthcoming issues of the journal.

How did all of you come together around the idea for “The Soundwork of Media Activism“? Will you share some perspectives about your working methods and ideas concerning collaboration?

Josh Shepperd: The concept materialized based upon my conversations with managing editors Jay and Phylis sometime around June of 2019. There’s been strong growth in the subdiscipline of sound studies over the past five years thanks to academic collaboration with the Library of Congress, and due to scholarly sites like Sounding Out! While there’s a great deal of excellent research about film sound and radio history, outside of a very small circle of dedicated scholars sound is typically treated as a tertiary topic for political and cultural analysis. Then the key was to make sure that a special issue would address crucial humanistic issues related to sound from multi-disciplinary and diverse perspectives. So I invited scholars who I thought were innovating within their sub disciplines to collaborate.

Jen Shook: Along with “soundwork,” which Michele Hilmes had defined, in writing the call for submissions we borrowed from Charles Hale’s definition of activist research as methods through which social, cultural, and political agents have “aligned to allow dialogue to shape each phase of the process” (Hale), while Shan Mukhtar brought a view of activism as  “intentionally embracing discomfort and risk in order to organize for a larger ethical purpose” (Mukhtar). We also knew that “media activism” could include both activism in relation to media and activism enacted through media. We wanted to offer a wide invitation to see beyond what we might expect, even though together we had developed a list of possibilities including “Sound Archives, Preservation, and Visibility Research; Radio Broadcasts; Gaps in Audio Archival History; Memory and Nostalgia; Noise; Audio Copyright and Intellectual Property Rights; Environmental and Landscape Sound; Listening and Surveillance; Sound in Public History and Shared Authority; Storytelling Traditions/Repertoire; The Role of Sound in Ideological Reproduction; Performance and Privacy; Sounds of Protest; Soundscapes.”

Collaboration, one of my favorite things both to do and to examine, is nonetheless wildly difficult. Every collaboration is a learning experience regarding how people work (down to basics like tools, platforms, and processes), what we each prioritize, what we know and assume from our disciplinary backgrounds, and particularly right now, how we balance workloads as we each move in and out of various individual crises.

Alex Sayf Cummings: I came to this project through Josh Shepperd, who is a restless connector of people and builder of social infrastructure in the causes he cares about. Josh seems to be really attuned to the power of collaboration.  I was thrilled to get to work with Georgia Ennis and Jen Shook and learn from their depth of expertise in disciplines and cultural domains that are really different from my own. In academia people often laud the importance of interdisciplinary and collaboration, yet the institutional structures of higher education tend to strongly disincentivize collaborations like this. And the conditions of working under COVID certainly have presented challenges to all manner of collaborative work. At the same time, when we’re all living in “Zoom World” anyway, this project of ours really provided a locus of creative interaction and engagement that was pretty enlivening for me. I’m hopeful that platforms like Resonance can create the space for much more of this kind of unconventional, interdisciplinary, collaborative work.

Georgia Ennis: Josh Shepperd was central to bringing our networks together, as well as for the series’ focus on soundwork. It is so exciting to be working with other scholars who are thinking about sound and activism in different ways through their work. Like our nod to Hale’s definition of activist research being shaped by dialogue, our work together has emerged through Zoom conversations and email chains at each stage of the process. This sort of organic, decentralized collaboration really made sense this year where we so often came together apart.

Michele Hilmes’s concept of Soundwork was central to the development of this special issue. What influence has her work had on each of your research and practices leading up to this point?

Josh: Hilmes is warmly referred to as the “Dean of Radio Studies” in Film and Media Studies, and recently won the lifetime achievement award from SCMS. She’s also my mentor. Her books have been internationally influential well beyond the study of a single medium, and she has helped to reconcile debates in formal analysis, cultural studies, feminism, and media industry research. More recently she’s been searching for a way to synthesize different approaches to sound studies into a collaborative methodological discussion—which she’s called “soundwork.” My contribution was simply to ask if her approach to sound might be applied to political analysis. To interrogate that question I needed to recruit strong scholars from other disciplines—in this case history, performance studies, and anthropology, leading to participation from Alex, Georgia, and Jen.

Georgia: One of the most exciting aspects of my postdoctoral fellowship at Penn State has been the opportunity to engage more widely with media studies scholarship outside the anthropology of media. Hilmes’ concept of soundwork, as well as her related scholarship on women and media, has been especially fruitful to think with as I develop my book manuscript exploring Amazonian Kichwa women’s engagements with sound, performance, and media. Soundwork is such an exciting concept because as Alex notes—and we see reflected in the series—there are so many kinds of labor that sound performs, and so many ways that people work with sound.

Alex: In my own work, I’ve written about music pirates and bootleggers whose semi-legal and illegal activities skirted around the edges of political action; they sometimes sought the obscurity of the shadows and other times loudly proclaimed themselves as the dead-set opponents of the record industry, capitalism, copyright law and so on. I think Michelle Hilmes’s concept of soundwork is so insightful and so useful as a tool because it brings together such a wide range of activities, usually treated as disparate and distinct, siloed in genres or industries or cultural fields—things such as radio, podcasting, sound art, tap dance, the sounds of protest, even scientific measurements of sound related to climate change could all be understood and situated under one rubric as they had never been before. The quasi-political activities of the music pirates I wrote about make a lot more sense when seen through the light of this concept, and especially when situated alongside the many protean ways of working with sound that the essays in this issue explore. I think this issue is so exciting because it features a lot of scholars, artists, and activists going in wildly different directions, yet the throughline of soundwork keeps them connected in a really elegant way, and opens up possibilities of comparison and contrast that we might not otherwise have considered.

There is a level of exuberance and optimism in the scholarship that is presented in this issue. Can you tell us about how your call for papers helped to garner such a diverse range of writings on media activism?

Jen: We each have quite different networks, so collectively we move in many disciplines and communities. It’s been fascinating to see where the call was most actively circulating; theatre listservs and groups, for example, responded strongly, perhaps because while many performance scholars think about sound, they haven’t been often invited into sound studies spaces. Having crafted the CFP to encourage formats beyond the traditional academic paper also has served us well, enabling us to work with artists and designers, for example, who can participate through artists’ statements or interviews but might not have submitted a conventional “article.”

Georgia: I completely agree that the wide disciplinary networks we engage in helped to garner the really effervescent scholarship that we see across the series.

All of you will be staying on to help edit a special continuing special series based on the Soundwork of Media Activism theme as a part of our second volume in 2021. Will you tell us a bit about some of the work you are reading and developing as a part of the ongoing series?

Jen: When we met to discuss the first submissions, we noted that many expanded how we’d previously read Hilmes’ concept of soundwork, and quickly agreed that playing at the edges of that definition could open up networks and relationships we couldn’t foresee. It’s great to find, for instance, writers thinking about listening as an activist communal ethic; that emphasis has been emerging particularly through the lenses of Indigenous and Black thinkers and people committed to listening with non-human kin—all perspectives we felt vital to include. Likewise, we’re seeing land and bodies emerge as sites of soundwork. I have been thinking about performance across the apparent boundaries of “live” and “digital” performance and memory cultures; how virtual memorials, for instance, invoke presence and ritual through sound, and how podcasts contribute to community building across geographies. The more we talked, the more I felt called to revisit and theorize some pedagogical questions from past experiences teaching with sound storytelling. We have an opportunity to highlight work that unites research, making, teaching, and activism as overlapping practices.

Georgia: Hindsight and knowledge of structural inequality make much of the post-pandemic world feel inevitable. But I don’t think any of the editors expected all of the upheavals that 2020 would bring, nor the ways so many of our papers would respond to a moment of collective crisis and activism. Those connections continue into the later volumes of the series—we have some really engaging pieces that speak to topics that remain at the fore in 2021: Black women’s transnational activist media networks; sound and space in urban migration; right wing radio; the use of sound for both protest and violence, as well as pedagogical and artistic reflections on sound.

Josh: I work on the history of when media industries have explored alternative economies of scale than free markets, especially public media. Most of this history still remains unexplored and sits unprocessed in university, state, and federal archives. An unusual amount of my reading time is spent with evidence—typically primary documents—and then social and cultural theory from continental philosophy to critical race and queer theory, to help make sense of how activists begin with a concept of public good, and then work to materialize their principles into sustainable, institutional practices.

We are pleased to make “The Soundwork of Media Activism” issue free to read for a limited time.

This post is published as part of our #SCMS21 blog series. We invite you to visit our SCMS virtual exhibit booth for more information about UC Press’s publications in media and film studies. 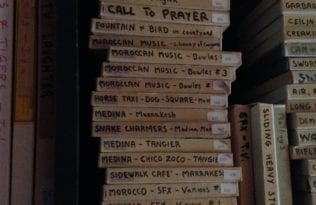 A Sneak Preview of Resonance: The Journal of Sound and Culture