Among the most celebrated art forms created by Muslim artists in late medieval/early modern times are countless illustrated texts of great literary works in several Islamicate languages, most famously in Persian. Many of these manuscripts contain intriguing images depicting major ‘boundary crossing’ characters whose stories play an important role in my book, Crossing Confessional Boundaries.

I chose this particular image for the cover because it brings together three symbol-rich personages whose stories are often interwoven in Islamicate lore. All three major figures depicted here—Elijah, Khidr, and Alexander the Great—play recurring roles in Crossing Confessional Boundaries as they have in multiple religiously-themed texts by famed literary masters.

Nizami (ca. 1140-1202) was a premier twelfth century Persian poet of Azerbaijan celebrated for his mastery of elaborate metaphor and richly imaginative narrative. Fans of “classic” rock star Eric Clapton might recognize the name, since Clapton quite publicly credited him with the inspiration of “Layla,” the musical lament of an unrequited lover. In the fifth poem of his magisterial Quintet, Nizami recounts the story of Alexander the Great’s ever-frustrated quest for the immortality he believed was the just reward of a world-conqueror. In Islamic lore, Alexander became an “adopted” Persian by virtue of his marriage to the daughter of a Shah. Early exegetes of the Qur’an identified the scripture’s unnamed “Two-horned one” as Alexander—ruler of the East and West, and in some narrative traditions, the Macedonian monarch attained the rank of Prophet. Nizami’s Iskandar-nama (Book of Alexander) follows the feckless quest that culminates in Alexander’s wandering aimlessly through the Land of Darkness, where he hoped to gain access to the wondrous source of the Water of Life.

At the center of the cover image we see two important “boundary crossing” figures—Elijah and Khidr—“brother prophets” in Islamic lore, who share the miraculous prerogative of deathlessness. In their hidden cave, they chat about eternal verities at the source of the spring. This interpretation of the frequently illustrated scene in Persian manuscripts depicts Alexander and his royal retinue arrayed in a semicircle around the cave. They bypass their goal unawares, only to continue the travels that would end in the king’s death, an admonition to be ever mindful of one’s mortality. 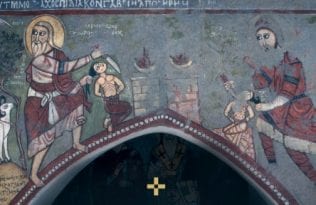 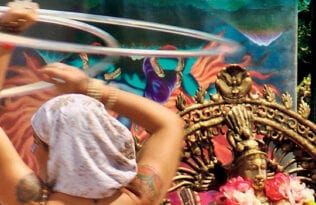