by Jordan D. Rosenblum, author of Rabbinic Drinking: What Beverages Teach Us About Rabbinic Literature

A good textbook can be dry—so long as it’s dry like a nice red wine and not dry like a boring recitation of tax codes. With this caveat in mind, I endeavored to write the former, even when (admittedly) some of the corpus I was introducing read like the latter.

My book, Rabbinic Drinking: What Beverages Teach Us about Rabbinic Literature, is designed as an introduction to themes in rabbinic literature. Instructors teaching a college level or adult education course introducing this subject have always had to decide between collections of texts or historical overviews. Never before have they been able to introduce key themes in rabbinic literature in a single volume. And since I could choose a variety of ways to introduce these themes, I decided to focus on beverages.

For a college audience, this works quite well because two of the most discussed beverages are beer and wine. These alcoholic beverages appear in a variety of unexpected and informative manners. For example, usually teaching the concept of ritual purity and impurity does not excite students. No matter how hard I tried to grab their attention while discussing the purity status of an impure oven that is broken into separate pieces, my students weren’t exactly having it.

But then I began to teach them about the ritual purity laws associated with a fascinating case: what to do when your drunk friend pushes you into a river.

You’ll have to read the book to learn the answer, but I will say that part of it can be summarized in two words: it depends. This is an answer that appears often. Can you use beer instead of wine for certain rituals? Can you drink water that flows out of the mouth of a human statue? Can you cash a bad check to pay for wine? Understanding how to parse these variables introduces you to the world of rabbinic literature.

While beer and wine appear most often, many other beverages are discussed. Perhaps most important of these other drinks is one rarely included in these types of conversations: breast milk. Breast milk was a fascinating liquid for the ancient rabbis. It was produced by one, for them, non-normative group of people (women), for another non-normative group (infants), for a limited time, and during that time it was vital to human survival. While there are heated debates today about breast feeding, in antiquity there were no viable alternatives like formula. However, in both modern and ancient debates there is a rhetoric of control, which seeks to control female bodies when discussing breast feeding.

Breast milk appears in discussions of ritual impurity, since the rabbis, like most ancient and medieval Western medical thought, considered it to be transformed menstrual blood. And since menstrual blood is the most tabooed of human bodily fluids, this required extensive conversation. Breast milk also appears in discussions of marriage, since the rabbis believed that fathers, but not biological mothers, had an obligation to feed their infants; and their wives had an obligation to feed their husband’s infant. However, this obligation disappeared in the case of divorce, even if the ex-wife is the child’s biological mother. Confused? I was too, until I wrote the book. And now I think I (mostly) have it figured out.

Beverages appear everywhere in rabbinic literature, from biblical interpretation to medical opinions. Glasses are raised at weddings, at funerals, at Sabbath feasts, and at commonplace meals. Rabbis visit bars and the homes of colleagues, where ordinary and extraordinary events unfold. All of these tipples were laden with meaning. To gaze into the ancient drinking vessel is to observe the fermentation of ancient religion.

Teaching my students to appreciate these ancient texts by focusing on drinks and drinking brings the ancient world to life. After all, they might not connect with a text about the legal limits of when one can recite an evening prayer, but they can relate if that conversation includes an anecdote of children coming home late from a drinking party and, finding their scholarly father waiting up for them, they quickly ask for his legal opinion on whether it is too late to recite the evening prayer. By focusing on beverages, students are able to move from text to context.

Writing this book was challenging and fun. Often as a scholar you have two personas: your stodgy academic prose self, used for writing “serious” articles and books, and your teaching personality, used to excite students (at least until after the add/drop period is over). This was my opportunity to write in the voice in which I usually teach. And, hopefully, it pairs well with a nice dry red wine.

A Winter Salad and Wine Pairings from Evan Goldstein 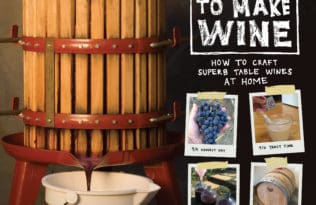 How to Become a Garagiste 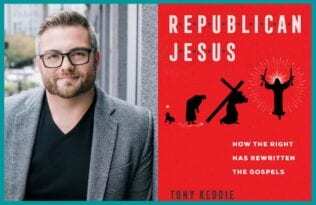 Q&A with Tony Keddie: on Republican Jesus and How the Christian Right Weaponized the Bible