In this most challenging of years, Anxiety and Rebellion proved to be an appropriate choice of theme for the 2020 annual convention of the Association for Slavic, East European, and Eurasian Studies (ASEEES). Anxiety and rebellion are rooted in a variety of social, cultural, political, and economic displacements: inequality and loss of economic status, changing cultural maps, demands for gender or ethnic equality, and fears of uncontrolled migration. The articles selected for this virtual issue represent a cross-section of the many studies published in Communist and Post-Communist Studies (CPCS) related to these phenomena of anxiety and rebellion.

Perhaps of greatest concern has been the rise of far-right populism, ethno-nationalism, and illiberalism in post-communist Europe. Bojan Bugaric (2008) connects rising populism in Central and Eastern Europe with the ongoing weakness of constitutional liberalism and the rule of law in the region. He notes that already by 2007, populists were politicizing the civil service, curtailing the independence of the mass media, and rolling back anti-corruption measures. Attacks on the rights and freedoms of minorities escalated along with rising xenophobic nationalism.

Seeking to explain the relative success of far-right parties, Lenka Bustikova and Herbert Kitschelt (2009) examine the combination of the legacies of communist-era regimes (national-accommodative or patrimonial) and ethnic endowments. They argue that the “losers” in economic transitions in patrimonial-style regimes were not cushioned against market reforms, such that the rapid dismantling of welfare states and sudden rise in inequality created the conditions for far-right parties to translate economic grievances and dissatisfaction with government into hostility toward ethnic minorities.

The effects of market reform and the dismantling of communist-era welfare states are also linked to threats to democratic legitimacy by corruption and inequality, both of which reflect the legacies of communist-era rule as well as the uncertainties and precarities of daily life in a globalizing world. However, comparative research questions both the nature of the relationship between corruption and inequality as well as the relationship between civil society and the success of anti-corruption efforts.

In their examination of the role of civil society groups in anti-corruption campaigns in Russia and Ukraine, Marina Zaloznaya, William Reisinger, and Vicki Hesli Claypool (2018) find that civic engagement in anti-corruption in post-communist states can have undesirable consequences. On the one hand, civil society groups may be used to foster support for autocratic regimes while protecting corrupt actors from prosecution. Alternatively, they may become caught in a combative relationship with the government, leading to “stalled reforms, lowered public trust of formal institutions, and decreased support for anti-corruptionism.”

Considering the demands for ethnic, racial, and gender equality that challenge traditional cultural relations, Piotr Żuk and Paweł Żuk (2020) question why European integration has not steered post-communist European countries toward greater cultural integration and tolerance, noting that “the idea of a gay lobby that leads to the destruction of civilization can even be a symbol of Eastern European authoritarianism.” In surveying a range of cases across the region, they argue that homophobia and anti-Western nationalism might be interpreted as “cultural compensation for economic disappointments.” While anxieties raised by market transition and democratization facilitated the scapegoating of ethnic and gender minorities especially by far-right parties, Aidan McGarry (2016) examines responses by Roma and LGBTI communities in their appropriations of public spaces through pride parades in Prague and Sofia. In doing so, these communities aim to control their visibility in public life, affirming their collective identities and equal participation in the public sphere.

The 2015 migration crisis proved an important inflection point for illiberal politics and far-right actors in post-communist Europe, calling particular attention to institutional weaknesses and friction between the EU and member states. Robert Stojanov, Oldřich Bureš, and Barbora Duží (2017) closely examine the ways that migration policy is approached and formulated in the Czech Republic, drawing particular attention to the mismatch between migration and development policies. They identify wide ranging policy incoherence between various government ministries and departments that were exacerbated by the EU’s handling of the 2015 migration crisis, leading to the pessimistic conclusion that “the prioritization of the fight against irregular migration and the externalization of EU’s border controls . . . are likely to remain the sole areas of agreement between the Czech and EU-level migration and development policies in the foreseeable future.”

Generalized social trust also proves significant in relation to the spread of disinformation and fake news and the undermining of confidence in government and weakening of social capital. Drawing on research involving youth in the Czech Republic, Aleš Kudrnáč (2020) finds that recognizing disinformation is more related to one’s ideological leanings and general social trust than to media literacy. Perhaps unsurprisingly, this means that education does not provide a quick fix. Rather, the problem of countering disinformation requires a broader approach of cultivating civic education and fostering critical thinking.

Q&A with Anthropologist Rebecca Lester: What We Get Wrong about Eating Disorders
JAMS Wins the American Musicological Society's Einstein Award. We Celebrate with Limited-Time Free Content from JAMS and Other UC Press Music Journals 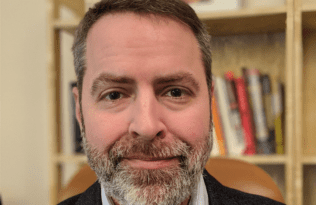