At this year’s virtual MESA conference, we hope to spread the news of our exciting Berkeley Series in Postclassical Islamic Scholarship. Guided by the series editors, Asad Q. Ahmed and Margaret Larkin, the series will explore Islamicate intellectual history as represented by various disciplines and genres. Translations, critical editions, and monographs related to texts in the fields of philosophy, literature, theology, poetics, grammar, hadith, exegesis, etc. are all welcome, provided they directly and/or indirectly concern the legacy of rationalist (ma’quli) scholarship.

In this interview, co-editor Asad Ahmed joined us to explain the goals for the series and how interested scholars can submit their work. Ahmed is Professor of Arabic and Islamic Studies in the Department of Near Eastern Studies and Affiliate Faculty in the Department of Philosophy at the University of California, Berkeley.

I work on Islamic social and intellectual history.  In the latter field, I am generally concerned with rationalist (ma’quli) disciplines, such as logic, legal theory, philosophy, rational theology, and astronomy.  I concentrate mainly on the postclassical period (ca. 1200-1900), with most of my energies now devoted to South Asia and the Persianate world.

The Berkeley Series in Postclassical Islamic Scholarship is still a relatively new one, though it already includes some important scholarly works. Can you explain how the series came about and what your goals are for the series?

Until the launch of this series, the field of Islamic Studies had a major lacuna: there was no dedicated platform at any major university press for publishing works in intellectual history that also gave substantial space to the tradition’s investment in technical details; further, scholarship engaging the postclassical period (ca. 1200-1900) was generally limited.  Such platforms had existed for decades in other disciplines, such as philosophy, classics, and law, and they had facilitated their growth.  This series was created as a remedy, as a way to promote the broad study of the intellectual history of Islam, especially the rationalist disciplines and those disciplines that are associated with them, via fine-grained technical analyses of texts.  Publication of such works in a major university press allows them to be more accessible and ushers such scholarship into the mainstream.

What are your hopes for how the series will influence and shape future scholarship in Islamic studies?

Scholarly publications in the field that draw broad conclusions and that also do not eschew fine-grained and technical analyses of texts will set us on a new path for writing the intellectual history of Islam.  That a leading university press is now invested in this approach will also encourage younger scholars to train in demanding texts and disciplines and to produce more meticulous general narratives.

Do you have any recommendations for scholars hoping to submit work for the series?

Learn more about the Berkeley Series in Postclassical Islamic Scholarship 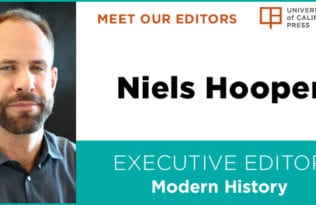