Held annually since 1982 and sponsored by the American Library Association and the American Booksellers Association, Banned Books Week is celebrated “in shared support of the freedom to seek and to express ideas, even those some consider unorthodox or unpopular.”

For this year’s annual Banned Books Week, UC Press is spotlighting some of our staff members’ favorite banned books. Get to know the UC Press team.

Her Body and Other Parties

“I love the worlds that Carmen Maria Machado builds; they are sensual and strange, queer and beautiful, dipping into end-of-the-world stories and the lives of ‘literally’ invisible women. She’s a fabulist who explores the everyday horrors of female existence frankly, exploring sexuality, power, and violence, and the fact that a Corrections Department blocked a woman from accessing the book is pretty on-the-nose.” —Jolene Torr, Campaign Strategist

Why it was challenged: The Missouri Department of Corrections denied an incarcerated woman access to this collection of short stories because it “contains inappropriate sexual behaviors, sexually explicit materials & pictures.”

“This graphic novel memoir is sweet and sharp and sad, from iconic lesbian cartoonist Alison Bechdel (whose famous “Bechdel Test” asks if a given movie or work of fiction features two women, who talk to each other, about something other than a man). It’s a uniquely dark and witty queer epic, and the stage adaptation was every bit as immersive.” —Maura Roessner, Senior Editor

“My favorite banned book of all times is Animal Farm. I first read it in as a teen while learning English at a local language school in my hometown. I chose it thinking a short allegorical story might be a fun read, and actually doable for someone just starting out. I missed a lot of Orwell’s subtleties back then, but the main message got through—that too much power leads to corruption and absolute power corrupts absolutely. Not until another read a decade later that I realized that it’s a satire on Lenin and Stalin.” —Lia Tjandra, Art Director

Why it was banned: In some places, the novel has been banned for its political theories. While few countries ban Animal Farm now, it has been on the Big List of Forbidden Books in as many as 126 countries throughout its life. After its publication, the novel was immediately banned by the Soviet Union and continues to be banned in Cuba and China.

“I didn’t know about George until I saw it on all of the lists of banned books. It’s a beatifully told, deeply humane, frequently funny story told from the inside. It’ll also make you cry, so be careful—and the emotion packed into the story is most certainly why people are so scared of it.” —Tim Sullivan, Director

Why it was challenged: Language and references that are inappropriate for young children

“I’m quite certain this was the first book I read during high school written by an author I’d been assigned (i.e., Another Country), where I was previously unaware of their homosexuality, because: Catholic high school. Giovanni’s Room deals FRANKLY with queerness and sexual otherness. It’s full of despair, hope, and truly beautiful prose. A few years after reading it, I was delighted to visit iconic LGBTQ bookstore Giovanni’s Room in Philadelphia, where I recall having purchased a book by George Bataille—another author whose works have been widely banned for obscenity!” —Peter Perez, Director of Public Relations & Communications

Why it was banned: Blatant homosexual characters and themes. Baldwin’s American publisher, Knopf, suggested that he “burn” the book because the theme of homosexuality would alienate him from his readership among black people. He was told, “You cannot afford to alienate that audience. This new book will ruin your career, because you’re not writing about the same things and in the same manner as you were before, and we won’t publish this book as a favor to you.”

Al Capone Does My Shirts
By Gennifer Choldenko

“Listened to this as an audio book when my now grown sons were in grammar school. We had great conversations about what it would be like to live on ‘The Rock’. We had our first conversations about autism and about how parents have to fight the system in order to get help for their children.” —Judi de Vries, Controller

Why it was challenged: Challenged on the New York state elementary- and middle-school reading lists (2015) because complainants said the book “perpetuates negative stereotypes by touting the infamous gangster Al Capone.”

Virtual Q&A with Edward Watts, author of The Final Pagan Generation
Wildfires and the Future: A Reading List 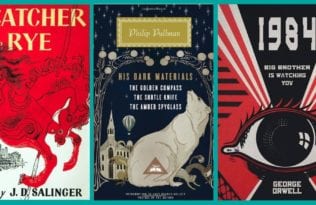 Innovation and Alternatives: UC Press Staff On Why Our Books Matter