by David Vine, author of The United States of War: A Global History of America’s Endless Conflicts, from Columbus to the Islamic State.

This week, in recognition of the nineteenth anniversary of the attacks of September 11, 2001 and  the twentieth consecutive year of U.S. war, a team of students from the American University Public Anthropology Clinic and I released a major report with chilling finding:

We have estimated that the United States’ Post-9/11 Wars have displaced at least 37 million people.

In collaboration with Brown University’s Costs of War Project, we conservatively calculate that just eight of the wars the U.S. government has launched or participated in have displaced 8 million refugees across international borders and 29 million within Afghanistan, Iraq, Pakistan, Syria, Yemen, Somalia, Libya, and the Philippines.

Thirty-seven million displaced is more than in any war since the beginning of the twentieth century—except World War II. For comparison, displacing 37 million people is equivalent to removing nearly all the residents of the U.S. state of California, or all of the people in Texas and Virginia combined. The figure is also about as large as the population of Canada.

Alarmingly, the actual number may reach 48–59 million people, which is comparable to the number of people displaced in World War II.

Our calculation came from research for my new book, The United States of War: A Global History of America’s Endless Conflicts, from Columbus to the Islamic State. The book tells the story of the long history of U.S. wars and the horrifying damage U.S. wars have inflicted. Many think that the past nineteen years of continuous war are exceptional in U.S. history. My book shows that the U.S. government has fought wars or engaged in other forms of combat in all but around 11 of its 244 years of existence.

This week, the Investigative Reporting Workshop is running an excerpt from the book, a short video interview with me, a longer written interview, an article about the 37 million displaced by the Post-9/11 Wars, as well as several maps and graphics revealing the extent of U.S. warfighting since 9/11 and the human and financial “costs of war.” The New York Times ran a story about our calculation today. Others in the media and beyond are already starting to take notice of this overlooked dimension of the damage caused by the Post-9/11 Wars.

You can view the full report from the American University Public Anthropology Clinic, and the Costs of War Project can be found at www.costsofwar.org.

For the full story of the incalculable damage of U.S. Wars, check out The United States of War. 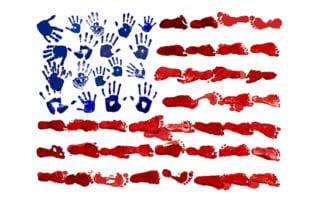 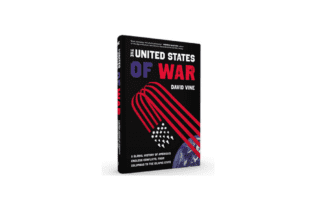 Watch: Why is the U.S. Always at War? 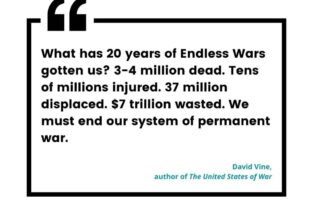