The Black Revolution on Campus
by Martha Biondi

Martha Biondi masterfully combines impressive research with a wealth of interviews from participants to tell the story of how students turned the slogan “black power” into a social movement. Vividly demonstrating the critical linkage between the student movement and changes in university culture, Biondi illustrates how victories in establishing Black Studies ultimately produced important intellectual innovations that have had a lasting impact on academic research and university curricula over the past 40 years. This book makes a major contribution to the current debate on Ethnic Studies, access to higher education, and opportunity for all.

You Can’t Stop the Revolution is a vivid participant ethnography conducted from inside of Ferguson protests as the Black Lives Matter movement catapulted onto the global stage. Sociologist Andrea S. Boyles offers an everyday montage of protests, social ties, and empowerment that coalesced to safeguard black lives while igniting unprecedented twenty-first-century resistance. Focusing on neighborhood crime prevention and contentious black citizen–police interactions in the context of preserving black lives, this book examines how black citizens work to combat disorder, crime, and police conflict.

In this book, Robert E. Worden and Sarah J. McLean argue that the procedural justice model of reform is a mirage. From a distance, procedural justice seemingly offers a relief from strained police-community relations. But a closer look at police organizations and police-citizen interactions shows that the relief offered by such reform is, in fact, illusory.

Criminal justice practices such as policing and imprisonment are integral to the creation of racialized experiences in U.S. society. Race as an important category of difference, however, did not arise here with the criminal justice system but rather with the advent of European colonial conquest and the birth of the U.S. racial state. Race and Crime examines how race became a defining feature of the system and why mass incarceration emerged as a new racial management strategy. This book reviews the history of race and criminology and explores the impact of racist colonial legacies on the organization of criminal justice institutions. Using a macrostructural perspective, students will learn to contextualize issues of race, crime, and criminal justice.

In an informed and impassioned account, Ruth Wilson Gilmore examines this issue through statewide, rural, and urban perspectives to explain how the expansion developed from surpluses of finance capital, labor, land, and state capacity. Detailing crises that hit California’s economy with particular ferocity, she argues that defeats of radical struggles, weakening of labor, and shifting patterns of capital investment have been key conditions for prison growth. The results—a vast and expensive prison system, a huge number of incarcerated young people of color, and the increase in punitive justice such as the “three strikes” law—pose profound and troubling questions for the future of California, the United States, and the world. Golden Gulag provides a rich context for this complex dilemma, and at the same time challenges many cherished assumptions about who benefits and who suffers from the state’s commitment to prison expansion.

Race and America’s Long War examines the relationship between war, politics, police power, and the changing contours of race and racism in the contemporary United States. Nikhil Pal Singh argues that the United States’ pursuit of war since the September 11 terrorist attacks has reanimated a longer history of imperial statecraft that segregated and eliminated enemies both within and overseas. America’s territorial expansion and Indian removals, settler in-migration and nativist restriction, and African slavery and its afterlives were formative social and political processes that drove the rise of the United States as a capitalist world power long before the onset of globalization. Spanning the course of U.S. history, these crucial essays show how the return of racism and war as seemingly permanent features of American public and political life is at the heart of our present crisis and collective disorientation. 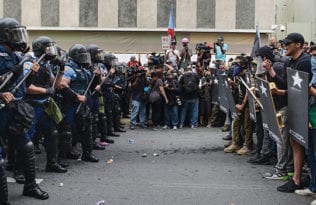