Days after taking the White House, Donald Trump signed three executive orders—these authorized the Muslim Ban, the border wall, and ICE raids. These orders would define his administration’s xenophobic, racist, ableist, and patriarchal approach toward non-citizens. By all accounts, he embodies an anti-immigrant platform.

But as Naomi Paik explains, the real problem is not Donald Trump. The problem is the United States and the foundational oppressions our country is built on.

Scholar Naomi Paik, author of Bans, Walls, Raids, Sanctuary, joined UC Press Editorial Director Kim Robinson in this virtual conversation to discuss the dark historical truths at the root of U.S. immigration policy, and how embracing an abolitionist sanctuary movement for all has the power to challenge state violence and overturn interlocking systems of oppression.

“The problem is not Donald Trump. The problem is the United States of America. So if we’re gonna get real about contesting and challenging everything he represents and his whole anti-immigrant, racist, patriarchal platform, then we have to get at those deeper roots. We can’t just focus on getting him out of office. We have to actually challenge the social conditions that produced him and made his campaign so relevant to so many people.”

As Paik explains, the popular narrative of the U.S. as a “nation of immigrants” is one that hides histories of settler colonialism and exclusionary immigration policies that have long sought to police the “right kind of immigrant” using logics of white supremacy, heteropatriarchy, ableism and more. Border control has also historically been wielded to aid capitalism, by turning immigrants into an easily exploited labor force.

If we want to address these problems, Paik says, we need to embrace an abolitionist sanctuary approach:

“Sanctuary is about a radical welcome of anyone without exception…like people who did really break the social contract. But still believing that everyone is worth protecting.”

Drawing on the recent calls to defund and abolish the police, Paik explains how extending an abolitionist approach to ICE is crucial to ending state violence and recognizing how the immigration liberation movement is tied to the movements for all oppressed peoples.

So how do we get there? Paik leaves activists, students, faith leaders, and teachers with sage advice on how to “find your lane” and work towards this goal using the resources available to you. Perhaps the place to start is by fighting for a change in public perspective – embracing a radical welcome of everyone, without exception.

The South Bronx battles on amidst the pandemic, the protests, and police violence
Fourth of July: Challenging Freedom 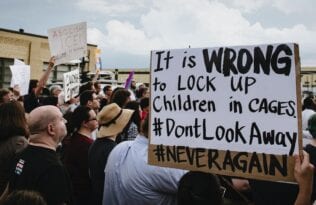