By Susan Sered, author of Can’t Catch a Break: Gender, Jail, Drugs, and the Limits of Personal Responsibility

The following blog is reposted from the author’s ongoing blog about updates from the women of Can’t Catch a Break. These blog posts offer readers and instructors a teaching tool to use with the book. You can read more about this project here.

COVID-19 and associated social distancing rules are exacerbating pre-existing inequalities: We know, for example, that low-income Americans and people of color are disproportionately exposed to and dying from the virus. So when I began reaching out to the marginalized, formerly incarcerated Massachusetts women I have known for more than a decade, I assumed I’d hear how the pandemic has intensified the long-standing challenges that they face due to illness, poverty (nearly all scrape by on $750 / monthly SSI – Disability checks), abusive partners, difficult family situations, and the stigma of criminal records.

The surprising story however, at least for me, is that the dozen-plus women I’ve spoken with over the past week seem to be managing COVID-19 better than many other people I know. As is always the case, each woman is dealing with somewhat different circumstances and draws upon unique perspectives and personality traits. Yet both Patricia, who is married, stably housed and employed as a home health aide, and Bobbie, who works in prostitution to pay for a room in an extended stay motel, explain that “not much has changed” in their lives as a consequence of the pandemic.

“There Is Nothing We Can Do!”

When we spoke last week, forty-five year old Melanie sounded calmer than she had in a long time (read more about her here). I asked Melanie if she is worried about COVID. “Not so worried; there is nothing we can do. … My doctor said ‘you wouldn’t survive it’ because of my spleen and COPD.”  Like nearly all of the women, Melanie suffers from serious, chronic physical and mental illnesses. Several years ago, due to her health challenges, she lost her beloved job working at a homeless shelter. Since then, she has grappled with a constrained day-to-day life in which she has neither the satisfaction of being part of a close-knit staff helping vulnerable people nor the pleasure afforded by a salary.

In recent years, nearly all of our conversations center on what she misses and on her health crises as she struggles with the responsibilities of managing and traveling to multiple doctors’ appointments, waiting in clinics, coordinating communication among specialists with conflicting priorities and prognoses, and navigating the convoluted mental health care landscape. Now, during COVID, however, the psychiatrist that she had been seeing every three months (not adequate for her needs) calls her once each month and “she said she is willing to help advocate.” Most of her other appointments have been put on hold, and the rest have switched to telephone meetings so that she no longer needs to take buses and trains to the various clinics. When she has faced an acute crisis, she’s found that doctors and medical staff are more sympathetic and easier to get hold of than in regular times.

Beyond the lightening of her logistical load, Melanie embraces the sense that she is no longer the sole agent responsible for her fate, an ideology stressed in the many rehabilitative programs she has attended. Throughout her adult life she has been held responsible for her problems – and for solving them. She may have been over-prescribed pain medication in the wake of botched surgery, but the Court held her responsible for illicit drug use and sent her to prison where she detoxed on her own, alone in her cell.

Now, things are different. Challenges during COVID are communal: as Heidi comments, “Everyone is going to get it [COVID].”  And responsibilities have shifted to the government and the hospitals: as Vanessa enthuses, “Everyone got the stimulus check.”  (Whether or not these statements are factually correct is immaterial here; the point is that this is what they observe and believe.) Melanie, for whom losing her job destroyed her sense of pride, worth, camaraderie and normalcy, COVID means that now almost no one is going to work. Now, almost everyone needs government assistance. Now, almost everyone faces health scares – she is not the only one afraid that a cough indicates a fatal disease. In these ways, COVID has made marginalized women like Melanie feel “normal” as all Americans now are living the way that she has lived – with fear of disease and death and with restrictions on individual autonomy.

Like many people during lockdown, the Massachusetts women describe loneliness and boredom – watching too much television, playing too many games on their phones. But this seems to be less of a theme than I expected.  Rather, most seem to relish the normalization of their personal preferences to stay home. For some, the lockdown actually makes life easier. Erin explains: “I’m not afraid of COVID19. I’m neurotic from being jumped and robbed. … I still have PTSD. I’m more of a recluse. … I’ve been doing pretty good during COVID19. I am busy cleaning – I have OCD. I’m doing DIY projects, crafts, watching movies at night with my husband. It’s a humbling, boring life – but I love it!” For perhaps the first time in her life, Erin feels that her background actually helps and that she is able, competent and empowered to do the right thing. “It’s not for nothing [that I’m managing well]. I’ve been through hell and back. I am doing the right thing – hand sanitizer, masks, washing my hands.”

The subject of masks came up often in the conversations – nearly always in the context of compliance with government orders to wear masks.  Vanessa, who rarely has expressed interest or knowledge in anything beyond her own immediate circle (at least to me), told me that she wears a mask when she visits her mother and that it bothers her that Trump doesn’t wear one. She said, “We have to cooperate with the government, do what they say [about coronavirus].” Along the same lines, when I asked Melanie what she thinks about how the government is handling COVID, she replied, “[Governor] Baker is doing a good job [keeping things closed.] The government [Washington] shouldn’t be opening things too soon.”

These declarations of trust in the government seem puzzling coming from women who have suffered from some of the most egregious aspects of institutional harm. They have been prosecuted and incarcerated on minor, non-violent charges (typically drug related) and lost their housing and custody of their children in the wake of incarceration. They repeatedly witness erratic bureaucratic behavior and the failure of government agencies to protect them from violent men, dangerous neighborhoods, and the injuries of poverty.

One explanation simply may be that they are accustomed to authorities making random demands and have learned that it’s easier to go along with them than protest. And, while “the system” overall is seen as arbitrary, unfair and unhelpful, healthcare is an exception. Universal healthcare coverage has been the norm in Massachusetts for close to two decades. Few women remember ever being denied care; nearly all take prescription medications; and most of them – like Melanie – make extensive use of healthcare services and facilities. They tend to trust doctors and often go to hospitals (especially emergency rooms). From a young age, they have been steered into medical responses to suffering – turning both to illicit drugs and to doctors for help with a broad array of pains. It may not be surprising then they trust government authorities during a crisis defined in terms of health and illness.

Throughout the fifteen years since Melanie stopped using heroin, she has been embarrassed by the track marks on her arms and feels that when she goes out people stare at them. Some don’t want to “catch something from a junkie” and some are simply appalled or intrigued. These days, however, she feels that no one notices them. Rather, what’s important is that she – like every other good, responsible citizen – wears a mask when she goes out. Melanie is delighted to have a Hello Kitty mask and a butterfly mask (she has always loved butterflies which, to her, symbolize freedom). These days, when her appearance attracts attention, it’s all positive.

Most of the women I have come to know, like Melanie, desperately wish to be part of something bigger than themselves – to be respected for being the kind of people who can contribute to the common good. Unfortunately however, they – like millions of other Americans – are more often are made to feel like outliers, “losers”, responsible for their own misfortunes, diseased, “screwed up.” All of the women have been sent to rehabilitative and therapeutic programs where they are urged to think about why they personally make bad choices in men – when the reality is that a third of American women experience sexual or physical abuse. All have been incarcerated and stigmatized for substance mis/use – when the reality is that the majority of Americans turn to alcohol, prescription medication and / or illicit substances in order to manage pain and sadness. All feel like failures because they cannot afford adequate housing or the consumer goods that Americans are led to believe we all should have – when the reality is that over the past fifty years America’s middle and working classes have been decimated by economic policies.

COVID has given women like Melanie and Erin a shot at “normalcy” — at being people whose fears are rational, whose talents (including the talent to stay home) are admired, who are no more and no less dangerous than anyone else, who can contribute to the public good, and who can access visible markers of conforming to social standards. The question for all of us is which side of the pandemic – obscene class and race-based disparities in mortality or budding signs of communal solidarity – will flourish in the months to come.

Pride Month: Celebrating LGBTQ People of Color
From the cholera epidemics to COVID, racialization of disease is an old trend

Judging a Book by Its Cover: Color Drenched Acts of Resistance 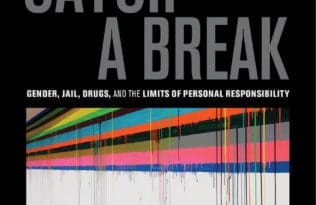 The Women of Can’t Catch a Break: Following Up