The work of addressing society’s core challenges—whether they be persistent inequality, a failing education system, or global climate change—can be accelerated when scholarship assumes its role as an agent of engagement and democracy. The books on the following reading list help provide context to the protests in the wake of the deaths of George Floyd, Breonna Taylor, Ahmaud Arbery, Tony McDade, and many others.

In this book, Robert E. Worden and Sarah J. McLean argue that the procedural justice model of reform is a mirage. From a distance, procedural justice seemingly offers a relief from strained police-community relations. But a closer look at police organizations and police-citizen interactions shows that the relief offered by such reform is, in fact, illusory.

A free ebook version of this title is available through Luminos. Visit www.luminosoa.org to learn more.

Race and Crime examines how race became a defining feature of the system and why mass incarceration emerged as a new racial management strategy. This book reviews the history of race and criminology and explores the impact of racist colonial legacies on the organization of criminal justice institutions.

In this groundbreaking exposé, Stuart Schrader shows how the United States projected imperial power overseas through police training and technical assistance—and how this effort reverberated to shape the policing of city streets at home. A “smoking gun” book, Badges without Borders offers a new account of the War on Crime, “law and order” politics, and global counterinsurgency, revealing the connections between foreign and domestic racial control.

Incarcerating the Crisis
Freedom Struggles and the Rise of the Neoliberal State
by Jordan T. Camp

In this searing critique, Jordan T. Camp traces the rise of the neoliberal carceral state through a series of turning points in U.S. history including the Watts insurrection in 1965, the Detroit rebellion in 1967, the Attica uprising in 1971, the Los Angeles revolt in 1992, and events in post-Katrina New Orleans in 2005. Incarcerating the Crisis argues that these dramatic events coincided with the emergence of neoliberal capitalism and the state’s attempts to crush radical social movements. Through an examination of the poetic visions of social movements—including those by James Baldwin, Marvin Gaye, June Jordan, José Ramírez, and Sunni Patterson—it also suggests that alternative outcomes have been and continue to be possible.

The first book-length treatment to analyze how bail reproduces racial and economic inequality throughout the criminal justice system, Punishing Poverty explores reform efforts, as jurisdictions begin to move away from money bail systems, and the attempts of the bail bond industry to push back against such reforms. This accessibly written book gives a succinct overview of the role of pretrial detention in fueling mass incarceration and is essential reading for researchers and reformers alike.

Focusing on neighborhood crime prevention and contentious black citizen–police interactions in the context of preserving black lives, this book examines how black citizens work to combat disorder, crime, and police conflict. Sociologist Andrea S. Boyles offers an insider’s analysis of cities like Ferguson, where a climate of indifference leaves black neighborhoods vulnerable to conflict, where black lives are seemingly expendable, and where black citizens are held responsible for their own oppression. You Can’t Stop the Revolution serves as a reminder that community empowerment is still possible in neighborhoods experiencing police brutality and interpersonal violence.

Atonement and Forgiveness
A New Model for Black Reparations
by Roy L. Brooks

For further reading we recommend exploring resources such as the Anti-Racism Reading List from East Bay Booksellers in Oakland, CA; the #BlackLivesMatter reading list compiled by Red Balloon Bookshop in Minneapolis, MN; or the Anti-Racist Reading List by Book People in Austin, TX. Also, visit Books for Understanding for a comprehensive list of university press publishing on race relations in the U.S. 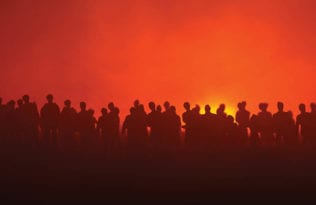